The Internet of Things wave is cresting in 2014, and according to Gartner, it’ll soon come crashing down.

In Gartner’s annual Hype Cycle Report for 2014, the most-hyped emerging technology is the Internet of Things (IoT), which Gartner believes has reached its “peak of inflated expectations.” According to the report, obstacles such as data standards and wireless protocols as well as the maturity of the technology stand in the way of mainstream popularity of IoT devices.

The Hype Cycle projected that IoT will plateau within five to 10 years, though, which is a good thing. It means eventually the technology will stabilize and developers may truly have the potential to drive it into the market.

(Related: IBM’s own plans for the Internet of Things)

On the downside of the curve, the next most-hyped emerging technologies are natural-language question answering (think Siri), wearable UIs, consumer 3D printing, cryptocurrencies, and last year’s most-hyped, Big Data. These are technologies that, following Gartner’s logic, are currently entering into a “trough of disillusionment” in which the public loses interest following overhype. The technologies then inevitably go back on the upswing before eventual mainstream adoption or fizzling out.

While consumer 3D printing is headed toward disillusionment, its business-focused counterparts—enterprise 3D printing and 3D scanners—are on track for mainstream maturity. Another hot trend, virtual reality, is nearing its upswing as well. 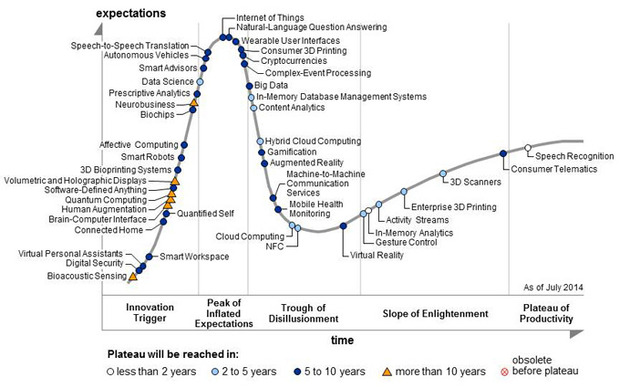 On the other side of the spectrum, the Hype cycle shows several technologies nearing their peak, including speech-to-speech translation and autonomous vehicles, as well as a number of emerging technologies with the brightest futures—those on their way up the curve with more than a decade before a plateau.