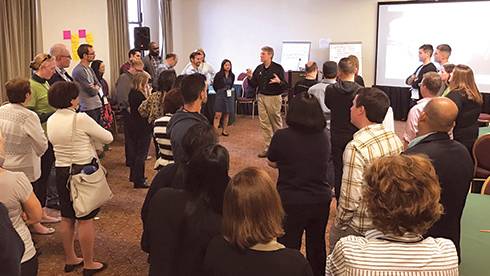 Wayde Stallmann, who currently works as an agile coach for Asynchrony Labs, has convinced companies that the lessons learned from improv activities can actually go on to create great software delivery teams, and more productive and collaborative meetings.

Most people are familiar with improv troupes, or groups of actors that get together in front of a live audience. Sometimes these groups are complete strangers, and sometimes, like in the recently added Netflix original “Don’t Think Twice,” they are a band of comedic friends that let the audience set the stage for them, working together to craft a hilarious story.

When you bring the world of improv into a meeting, it promotes the same team player qualities of a troupe performance, according to Stallmann. He identifies these qualities as collaboration, creativity, communication, and trust.

Every improv session or performance starts with three- or four-minute activities. He encourages companies to use these games during their daily standups or agile retrospectives. In fact, one of the great books on retrospectives, titled “Agile Retrospectives: Making Good Teams Great,” by Esther Derby and Diana Larsen, says that the secret to retrospectives is to get everyone talking in the first five minutes.

Unlike other improv games, Stallmann’s strategies are not scenario-based; instead, the activities are more like warmup games with lessons to be learned. One of the activities Stallmann starts with is a game called Alphabet Conversation. The way it works is one person starts off with a statement or sentence, beginning with the letter “A.” Then, the next person starts a sentence with the letter “B,” keeping the conversation going all the way to the letter “Z.”

Of course, to really show readers what the game is like, Stallmann tested it out with SD Times. Here’s a sample of the activity:

SD TIMES: After this call, I have to transcribe this interview.
STALLMANN: But, I want to make sure that I have time for a good lunch.
SD TIMES: Can’t you go to lunch around 12:45 pm?
STALLMANN: Didn’t really want to do that because I have a masseuse coming in at 12:30 pm.
SD TIMES: Everything will work out just fine…as soon as I transcribe this interview…
STALLMANN: Fine? You call that fine?! Oh yeah, that is fine, let’s get to work on that interview right now!

“You and I, as a team, created a story from nothing and neither of us could have done it on our own,” said Stallmann. “We get into the aspect of how a team can solve a problem that no one individually can solve.”

Not everyone approaches these “games” with open minds and arms, according to Stallmann. He has come into trainings and had teams that simply say, “We don’t play games.” When greeted like this, he encourages them to try the activities, and by the end of it, they are laughing, they let their guard down, and they actually learn a skill from it, he said.

“When I was AT&T as a Scrum Master, I had a team where we did a three-minute warmup game to start each standup, and we did this for two years straight,” said Stallmann. “They did it for a year after I left the team, which I think is testament to the fact that it wasn’t because I was asking them to do it.”

And since creativity is subjective, it’s hard to put a metric around these games and say that an improv game led to a breakthrough in software design, said Stallmann. These games are more about opening up in the creative sense to help get the team to more creative solutions and innovations. One thing is for certain, he said, and that is that improv activities do get teams into the collaborative spirit, it gets them focused, and it brings teams back “into the moment to be present.”

Often times in meetings, people’s minds wander, but when these games are played, there isn’t a moment that they aren’t thinking about the game, Stallmann said.

“You are focused and in the moment, and that being in the moment is where we want our software delivery teams to be,” said Stallmann. “The more times we practice, the better we get at it.”