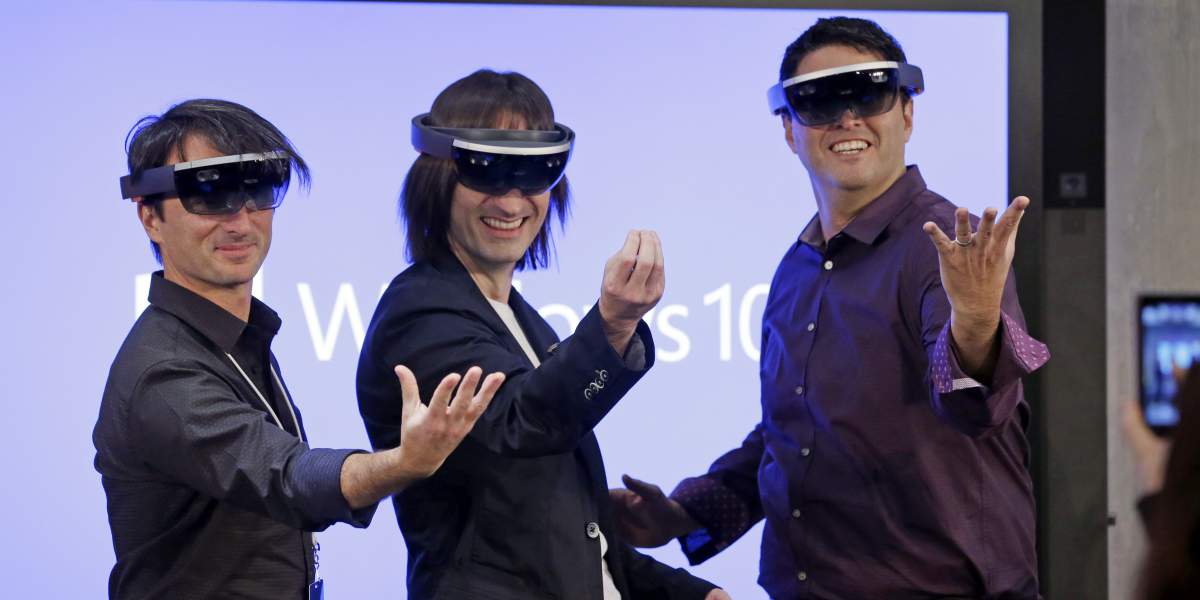 Microsoft’s HoloLens was one of the surprise highlights of the Windows 10 preview event held in January on Microsoft’s campus in Redmond. It was positioned as a holographic augmented reality device that would allow a user to change dynamically the appearance of the world around us.

But this is far more than what was presented. This is the birth of the next age of personal computing because with HoloLens in its final form, you may not need a PC, tablet or phone. You’ll just need HoloLens. Let me explain.

HoloLens integrates a number of technologies together to fool our eyes into seeing things as if they were really in the room with us. It uses a more advanced form of the Xbox Kinect camera to scan the environment around you, and then places that information in a unique computer mounted on your head with three processors. These include a CPU, a GPU and a new custom processor called a Holographic processor. This computer then blends the real world with computer images to create experiences that are both unique and compelling.

You can place virtual TVs or windows that look like windows on walls, or you can build 3D objects using the virtual tool and place them on real tables. Or, you can furnish the room you are in virtually, then have a 3D printer print what you imagine, or use a connected Web service to order what you have collected—transforming what you imagined into a real-world experience.

Granted, I can imagine some embarrassing moments, like if you went to sit on a virtual chair and ended up falling on top of what it may have concealed, which is hopefully not your kid’s homework assignment.

In its final form, the entire product resides on our head, and it is connected wirelessly to external sources both for data to create the image and so that it could be used for anything from a cell phone to a PC.

The next generation mobile computer
The limitations on mobile devices fall into three areas: screen size, which has to be small in order to be portable; mouse and keyboard, which are ever more limited the smaller the device is; and battery life. The HoloLens initially dramatically addresses the first two. You interact with the product with voice commands and hand gestures, and its display sits over your eyes, giving you the potential for a screen of nearly unlimited proportions. Voice command and voice to text, both of which are possible with this device, can handle much of the interaction typically tied to keyboards.

Further, the display has eye tracking, giving you what could be an even more effective way to move the cursor than a mouse. With the camera, you’ll have not only the ability to use virtual keyboards, but unlike projected keyboards that tend to put the keys on top of your fingers when you type, this product would see your hands and create a much more believable virtual keyboard.

However, because of that camera, you could also have the device learn sign language, allowing the use of a very unique skill set that already exists in the market.

Since it can project a display of any size, has massive processing capability and is head-mounted, it could take the place of your cell phone, tablet or PC, and seamlessly move between use cases depending on our need. If you wanted something that looked like a phone or tablet of any size, you could actually take a piece of cardboard that same size and write the word “phone” or “tablet” on it, and to your eye, once the HoloLens reads the word, it would appear as one of those devices. I expect, though, that most will prefer to have the device be far less limited to virtual form factors that mimic the real world.

A big step towards singularity
Because this is a head-mounted unit with much tighter integration into how we interact with it, I think this is a huge step toward what some of us call the Singularity. This is the future point where you can’t tell where you leave off and your personal computer begins. As we move toward that end, and as medical science advances, you can see a future where a procedure that could hardwire your vision to the computer, and future enhancements could allow you to feel and taste the virtual thing you can now only see and hear.

I think the HoloLens potentially showcases the coming age of wearable computing and foreshadows a future where it will be increasingly difficult to separate where the machine leaves off and the computer begins.