The flashiest news out of the Firefox 34 release may be Mozilla’s switch from Google to Yahoo as its default search engine, but the far more significant news is a WebRTC client built directly into the browser.

The first Firefox 34 Beta release including a WebRTC client debuted back in September, but the official Firefox 34 release packs new features and the client’s first name: Firefox Hello. The “Firefox Hello” WebRTC-powered chat tool allows Firefox users to engage in audio and video chats with others directly in their browsers. 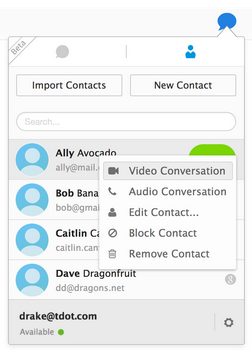 WebRTC technologies have been in development for years, a pet project of sorts of the World Wide Web Consortium. The international organization has worked to advance the technology while skirting the issue of competing HTML5 video codec standards that had held up the adoption process. As a result, WebRTC specifications are now enabled in some form in most major browsers. HTML5 is now a W3C recommendation, the group’s highest stamp of approval.

Given the wider implementation of WebRTC, Firefox is not the only browser pursuing WebRTC integration. Google is in the process of adding WebRTC to Chrome; the Opera and Firefox Nightly browsers have varying levels of real-time communication functionality; and even Internet Explorer is in the early stages of WebRTC exploration. The only major browser with no WebRTC functionality whatsoever is Safari.

For a much clearer breakdown of the convoluted WebRTC browser landscape and which browsers are making the most progress, check out iswebrtcreadyyet.com.

As for Firefox Hello, the WebRTC client is temporarily enabled in only a random 10% of browsers to prevent initial system overload. The full breakdown of new features is available in the Firefox 34 release notes.