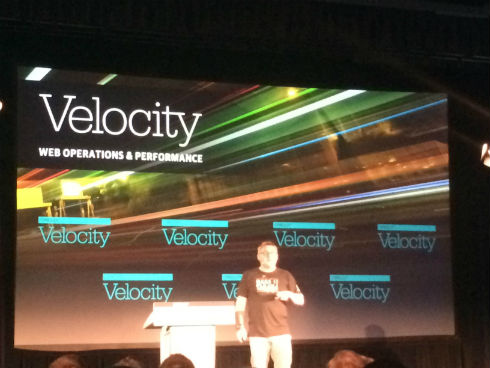 Amid the many Web operations and performance presentations at the New York Velocity Conference, one keynote tackled the role of DevOps and developers in driving enterprise innovation.

Justin Arbuckle, chief enterprise architect for IT infrastructure automation provider Chef, gave a keynote on “Myths of Control,” gleaned from his two decades of experience in large financial enterprises including role as chief architect of GE Capital. The presentation was centered on the idea that control over innovation lies not in the hands of developers, but the enterprise managers overseeing them.

“We’re not actually in control of this revolution,” Arbuckle said. “The little team of Web developers in a company, they’re the innovators. But if you don’t get the pragmatists in an organization to start adopting, we lag behind.”

A key point of the presentation was the idea that Web developers need to start innovating how enterprises adopt new techniques and ideas. Often when there is communication between enterprise developers and managers, transduction occurs. A certain amount of information gets lost in translation. So, to improve compliance, Arbuckle introduced the idea of a lingua franca, a new way to understand how developers are applying policy to a small domain of infrastructure.

However, before large organizations can start developing and improving compliance, common myths must be dispelled, and the lingua franca—which Arbuckle also describes as “infrastructure as code”—must be tested as part of the Continuous Delivery process.

He laid out two main myths of control in DevOps and the enterprise:

Management is able to control compliance from the top. “When that happens, compliance becomes literally a paper illusion,” Arbuckle said. “The feedback management gets plays into the questions they’re asking, which results in frustrated objectives for implementers and recurrent feedback as the organization grinds to a halt.”

He explained that to dispel this myth, either management must loosen its grip and allow developers to maintain velocity, or developers must involve managers early and often to evaluate effectiveness. “As long as they see how the sausage is made, it gets you a long way,” he said. “Ironically, if you move at a higher velocity with a basic lingua franca underneath it, describing basic elements of compliance in less fragile language, that is essentially infrastructure as code.”

The Web industry controls its own adoption. In what Arbuckle described as an “echo chamber” of a Web conference such as this one, the misconception that Web developers control adoption is easy to believe. “Only a small percentage of Fortune 500 companies are Web companies,” he said.

“These are very real issues we need to help them get over. We must take seriously that we have to communicate effectively with [enterprise management] on their own terms. The idea that these large companies will die out as Web innovation improves? Could happen, but it takes a long time for trillions of dollars of capital to dissipate and redistribute.”

In his role at GE Capital, Arbuckle spent the better part of the last four years starting small and moving quickly to transition a large enterprise to DevOps. He realized that with dozens of data centers and “the massive monkey of compliance bearing down upon you,” DevOps just makes sense.

“Ironically, DevOps is literally something that enables us to respond to these challenges,” Arbuckle said. “Something counterintuitive happens. If you have these feedback loops dumbing down the process of updating, what if you could make them really quick?”

Arbuckle viewed DevOps as infrastructure acting as code, more or less a specification of what the enterprise wants implemented. As specified languages grow richer through IT automation and configuration-management tools, managers gain the ability to specify what an enterprise’s objectives are through other means than writing code. It all comes back to that idea of a lingua franca.

“Looking at the results of your implementation of compliance, this is what happens in agile projects,” Arbuckle said. “It also starts to plug into this idea around freedom. Now people start having the ability to make decisions in a more limited context within their teams or sprints. Management then has less attenuation because it’s thinking qualitatively about the outcome.”

As emerging startups and smaller companies’ technologies begin to saturate the Web, a large part of their growth in revenue comes from enterprises. The rate of this revolution, Arbuckle reiterated, will be driven by the large enterprise.

“How do we think about distributed authentication across the organization?” he said. “If we want to start fundamentally changing the operating model of IT, we have to start with selling to the pragmatists.”