Do you want to build a snowman… out of code? 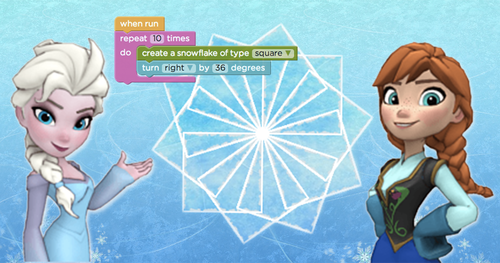 For years, organizations have been trying to get more and more kids into programming. Code.org promotes the Hour of Code to teach kids one hour of computer science. There are visual programming environments such as Alice, Blockly and Scratch geared toward kids. Plenty of board games, computer games and mobile applications that teach the basics of computer programming are available, and there have even been books written to get kids into coding.

But could phenomenon of “Frozen” be the ticket to persuading kids into computer science?

“Frozen” is Disney’s latest princess movies that just came out last year, and already parents’ playlists are full of “Frozen” songs, their children’s rooms are filled with “Frozen” merchandise and I can’t even tell you how many Annas, Olafs and Elsas there were out this past Halloween. Disney recently partnered up with Code.org to provide a Frozen Hour of Code tutorial featuring Anna and Elsa.

While non-profit organizations and commercial entities team up all the time as a way to get funding, raise profiles and promote their businesses, this could be one of the smartest moves Code.org has made in its quest to get kids into programming. There are plenty of other games and tools that teach programming, but nothing gets a kid’s attention more than a popular character from their favorite movie or TV show, and I think this past year with “Frozen” has proven that.

Kids will want to play a game that features Anna and Elsa because they are familiar and already in love with the characters. To them, they are playing a game featuring their favorite heroines, but at the same time they are learning how to write code and appreciate the fundamentals of logic and math.

If Code.org—or any organization for that matter—wants to lure kids into learning programming and fill the 1.4 million computer science jobs predicted to be available by 2020, they should look into promoting more coding games and projects featuring strong characters like Anna and Elsa. In 10 years, these kids could be the next generation of developers, programmers and computer scientists, using their skills to create their own versions of “Frozen.” So ask yourself… Do your kids want to build a snowman computer program?