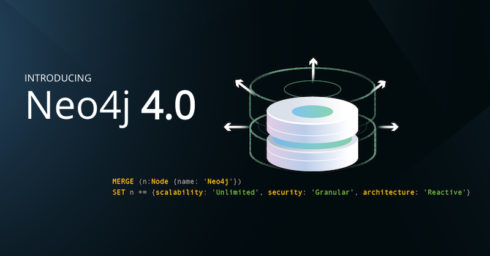 Neo4j Graph Database 4.0 has been released with a new reactive architecture to provide a “very responsive, elastic and robust” database, the company explained. In addition, the latest release features new multi-database capabilities, Neo4j Fabric, and a schema-based security model.

According to Neo4j, the 4.0 release of the graph database addresses the broad and complex challenges of application development still to come in the decade, such as unlimited scalability, intelligent data context and robust enterprise-grade security.

The team behind the latest release said that the Reactive Architecture makes the database more message-oriented and more data-centric.

“As a client developer of Neo4j, you now have the ability to take control over the whole stack in terms of resource usage. A client application fully controls the flow of records, which a server or cluster produces, so there’s no longer a tsunami of records flowing back,” Jim Webber, the chief scientist at Neo4j wrote in a post.

To accomplish this, the new architecture contains a reactive session in the Drivers codebase, which is bound to a producer via a flow API in JDK9 onwards.

Because the execution of resources is governed by the rate at which the client can process, users can get optimal use of resources, the client gets an optimal experience, and no longer has to store big buffers and send tsunamis of data over the wire, according to Webber.

Additionally, Neo4j allows multiple live databases per cluster with strong isolation so the databases are physically separate despite the fact they execute on the same cluster of servers.

“Now, because all of your databases are live in the cluster, the system database understands – and is itself, by the way, replicated around the cluster – so you get a universal view of your data. To administer it, you’ve got commands that seem humane and sensible to you,” Webber added.

The new Neo4j Fabric provides multi-database distributed queries that allow developers to write Cypher code while Fabric figures out how to transmit the query around the network.

The new release also provides a security system that’s sympathetic to different structures and properties. It contains a role-based access control approach, which is permission on entities for user, in which they can be granted access for the database.

“What our rules do is they proscribe rather than prescribe (because that’s the doctor’s job), against going across the diseased relationships and the diseased nodes,” Webber wrote.