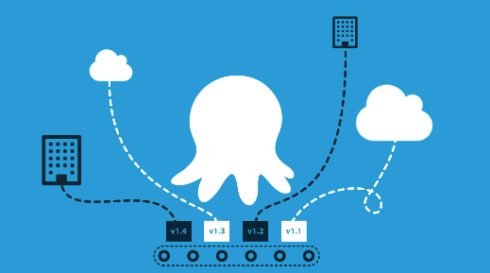 Many organizations have adopted DevOps, but their results vary because some teams have been unable to optimize production-related processes and collaboration. For example, in some companies, developers build applications and deploy them into production. At other business- es, operations professionals have had to learn how to code. Even when teams have a healthy balance of development and operations skills, each function is using its own set of tools. Using Octopus Deploy, DevOps teams can ensure better application reliability in production, facilitate common understanding and deploy code consistently across disparate target environments on premises and in the cloud.

“It used to be if you were an ops person, you’d click through wizards and you knew some scripting. If your company’s on-premises infrastructure failed, you knew what would happen,” said Paul Stovell, founder and CEO of Octopus Deploy. “Now if you work in ops you’ve got to know Python, Ruby and YAML because at least part of your infrastructure is in a public or private cloud.”

DevOps requires developers and operations professionals to work closer together than they ever have before, which is difficult to achieve when development uses a CI server as its source of truth and operations uses production monitoring tools.

“Our view is that we need to bring those things together,” said Stovell. “We think DevOps won’t really become a reality at companies until they share the same tooling and content.”

Octopus Deploy provides a single place- to manage releases, automate deployments and automate the runbooks so their applications can stay up and running anywhere.

Bridge the Gap in the DevOps Toolchain
The DevOps toolchain is an end-to-end concept but not an end-to end reality. Developers use IDEs, unit testing frameworks and release automation tools to compile code, unit test it and deploy it, but then the code breaks in production. Meanwhile, operations uses Power Shell, Puppet or Ansible. Because each role uses different tools the classic “it runs on my machine” problem arises which frustrates developers and operations, delays release cycles and creates more work for everyone.

“There isn’t a lot of knowledge sharing between dev and ops because there’s a tool chasm that’s preventing it. I think that’s the reason a lot of companies struggle with DevOps and fail to meet their goals,” said Stovell. “They think the way around it is teaching ops people how to code. Then, the ops people start thinking like developers and forget about why the software fails.”

Octopus Deploy is the missing piece between developers’ tools and operations’ tools. It integrates with the popular tools both groups use while providing a common mechanism to improve production-related outcomes.

Once an application reaches production, many things need to be automated such as backing up the production environment database and restoring it to the test environment, taking an application offline for maintenance and bringing it online again, and ensuring failover in a disaster recovery scenario — none of which are part of a CI process or enabled by a CI tool.

When DevOps teams use wiki pages as runbooks and those runbooks are used to create PowerShell scripts, there’s no good place to store those assets because they’re neither a deployment nor a CI process, they are simply an automation task that needs to be run. A more effective approach is to store all production-related artifacts in the environment where the deployments take place, which is a public or private cloud.

Enable Better Outcomes
With Octopus Deploy, DevOps teams can achieve higher levels of communication and collaboration using the same source of truth while ensuring that the applications they deploy run more predictably in production. In fact, large companies and businesses in regulated industries trust Octopus Deploy to help them meet auditing and compliance requirements.

Octopus Deploy is also capable of automating complicated software deployments and ensuring consistent deployment automation across all target environments. It includes other advanced deployment capabilities and patterns as well as more than 300 deployment steps out of the box.

Octopus Deploy is the missing piece between developers’