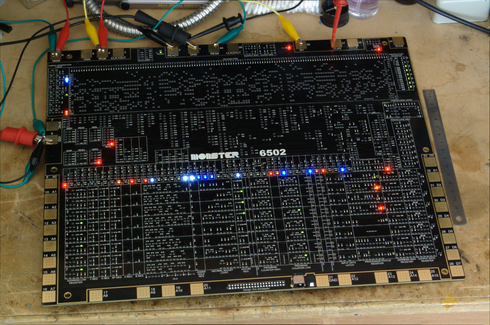 The MOS 6502 is an iconic processor, at the heart of dozens of classic machines, from the Apple IIe, to the Commodore 64, to the Nintendo Entertainment System and the BBC Micro. Around the Web, there are dozens of great resources on the 6502, from the Visual 6502 to stories of the C64 and the history of various machines.

But one fellow has now topped them all with his dedication to the 6502. Eric Schlaepfer, creator of the transistor-scale 555 timer that fits in two hands, has decided to recreate the 6502 entirely in transistors. Full transistors. Not those microscopic, on-chip ones etched by lasers we’re so used to today. Full-sized, old-school, portable radio-style transistors.

In Schlaepfer’s quest to build the 6502 into a board about the size of a modern motherboard, he encountered a number of interesting facts and puzzles needing to be solved. One interesting fact he found was that the Visual 6502 includes three extra transistors: T1088, T1023 and T3037.

He also had to find a way to recreate transmission gate transistors that switched current in the chip. From the blog: “The 6502 uses dynamic NMOS logic, so it has a large number of ‘transmission gate’ transistors that are used to switch currents. For various technical reasons, only a 4-terminal MOSFET can make an effective NMOS transmission gate. Those are really hard to find (nearly all MOSFETs are 3-terminal devices), but I found one—it’s an array of 4 MOSFETs on a single chip with a separate substrate pin.”

In the end, Schlaepfer produced a board that included 4,285 components and 1,996 nets. He has since sent his designs off to be built into actual circuit boards, with LEDs tracing the path of processing. This is, for now, entirely a hobby project for him, but he is planning to bring the board to Maker Faire next week. He’s also not ruled out entirely the possibility of selling this board or kit in the future.