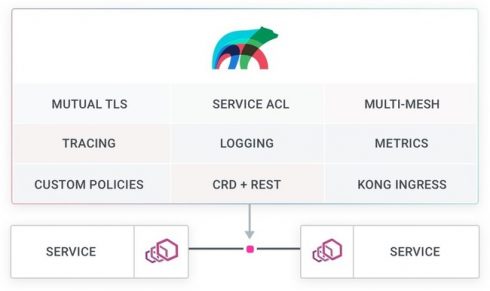 The problem that early adopters had with the service mesh was that the first generation meshes lacked a mature control plane and required extensive manual work and was often built on “immature proprietary networking libraries, according to Kong in a post.

Kuma is built to run on any platform, tackle complexity, and automate the process of securing underlying networks without having to change any code.

“We now have more microservices talking to each other, and connectivity between them is the most unreliable piece: prone to failures, insecure and hard to observe,” said Marco Palladino, CTO and co-founder of Kong. “It was important for us to make Kuma very easy to get started with on both Kubernetes and VM environments, so developers can start using service mesh immediately even if their organization hasn’t fully moved to Kubernetes yet, providing a smooth path to containerized applications and to Kubernetes itself”

Kuma is built on an Envoy-based service mesh, which utilizes the Envoy proxy sidecar.

According to Kong, control plane service meshes have shifted toward leveraging sidecar proxies with competitors such as Linkerd merged with Conduit and the original sidecar control plane mesh Istio in the ring. Sidecar proxies have been most commonly used in control service mesh architectures because they filter all network traffic from an individual service.

“It’s been amazing to see how quickly Envoy has been adopted by the tech community, and I’m super excited by Kong’s new ‘Kuma’ project,” said Matt Klein, creator of the Envoy proxy. “Kuma brings Kong’s proven enterprise developer focus to an Envoy-based service mesh, which will make it faster and easier for companies to create and manage cloud native applications.”

The key features of Kuma include: