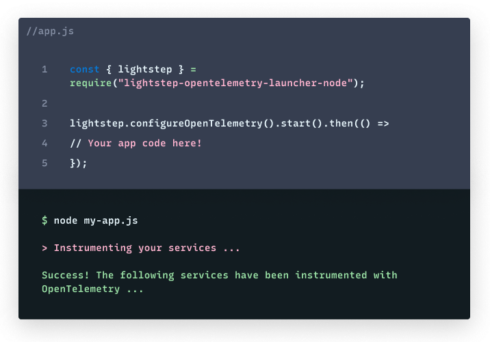 The release is based on the open-source project OpenTelemetry, which provides APIs, libraries, agents and collector services to capture distributed traces and metrics. Launcher now connects that data with Lightstep to provide observability and actionable insights, the company explained.  Distributed tracing provides insight into the life cycle of requests to a system so developers can easily find failures and performance issues.

“We understand that not every organization is Google, and that distributed tracing used to be a cumbersome integration for many engineering teams – that’s why it’s been a top priority for us to simplify things as much as possible,” said Ben Sigelman, CEO and co-founder of Lightstep. “We’ve been working hard alongside Google, Microsoft, Splunk, and other great companies to set the standard for how to collect data from distributed systems with the OpenTelemetry project. And with our new OpenTelemetry Launchers, anyone can gather and gain insight from that data with only one line of code.”

According to recent research from Lightstep, more than 90% of software engineers are either using or planning to use microservices, and almost all of them find it challenging. The nature of distributed architectures is also changing how performance data is collected, monitored and used. More teams are moving toward open-source tooling for APM, with Gartner predicting “by 2025, 50% of new, cloud-native application monitoring will use open-source instrumentation, instead of vendor-specific agents for improved interoperability.”

OpenTelemetry Launchers enable developers to copy and paste a line of code and get started with distributed tracing. The Launchers are available for Java, Node.js, Python and Go, and are 100% OpenTelemtry-native and compatible.

“When I helped to create the OpenTelemetry project in early 2019, I came up with the mission statement we still use on opentelemetry.io: to ‘make robust, portable telemetry a built-in feature of cloud-native software.’ Today, we’ve gotten a lot closer to the goal of ‘built-in telemetry’ with the release of Lightstep’s OpenTelemetry Launchers. With just one line of code (or, in some languages, “no lines of code”), you get 100% OTel-native instrumentation of your entire service,” Sigelman wrote in a blog post.