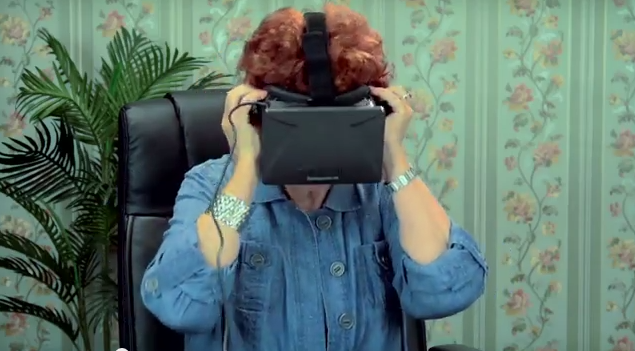 Our grandparents, great grandparents and even some of our parents come from a time of rotary phones, black and white TVs with no remotes, and no computers. In today’s world of mobile devices, wearables and robots, they can get a little confused and overwhelmed when it comes to technology.

Take my dad for instance. For the longest time he thought he had an iPhone because his phone came equipped with a camera. I can only imagine how he would react if handed something a little bit more advanced like the Google Glass or a smartwatch.

In a recent YouTube episode of “Elders React,” brothers Benny and Rafi Fine of The Fine Brothers document elders’ reaction to the Oculus Rift. The Oculus Rift is a strange device, and at first sight the group of elders had no idea what to do with it.

“I’m not going to electrocute myself, am I?” one asked. Other guesses as to what the device was included a snorkeling mask, mind control, something you wear during wartime, a space mask, or something to protect you from the Ebola virus. Once the elders found out that it was the Oculus Rift, some said they never heard of it, while others thought it was a rock band.

The brothers took the group through a series of virtual reality situations such as a virtual villa in Tuscany, a roller coaster and a haunted house.

Despite all the motion sickness and the fear of vertigo, the elders seemed impressed by the technology. Watch the full video here: