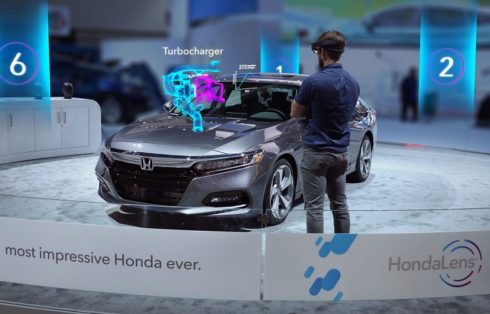 A new report found that Hologram AR leads the new trend and new application scenarios of automobile releases. Car makers have shifted to using augmented reality technology to introduce new car models in far greater numbers than before, according to the market research company Flipclutch.

In the car-unveiling events online, users logged in to the official website to watch the live event and were able to see detailed versions of the car in actual size using virtual reality.

Due to this demand, Hologram AR provider WiMi launched the “Holographic Academy of Science” to research the cutting-edge technology of holographic AR.

This form of virtual reality technology uses the principles of interference and diffraction to record and reproduce real 3Dl images of objects. Observers can see the different angles of the object being photographed.

Graphcore raises $222 million in Series E Funding Round to advance AI
Graphcore announced that it will use the funding to support the company’s global expansion to further future IPU silicon, systems, and software development.

The company currently makes the Intelligence Processing Unit (IPU) which is a new type of microprocessor specifically designed to support artificial intelligence workloads.

The IPU-M2000 is a 1U data center blade, built around four Graphcore Colossus GC200 IPU processors, capable of one PetaFlop of AI compute. Graphcore also offers the IPU-POD64 which is able to run large models across up to 64 IPU processors in parallel.

“We have created a technology that dramatically outperforms legacy processors such as GPUs, a powerful set of software tools that are tailored to the needs of AI developers, and a global sales operation that is bringing our products to market,” said Nigel Toon, the CEO of Graphcore.