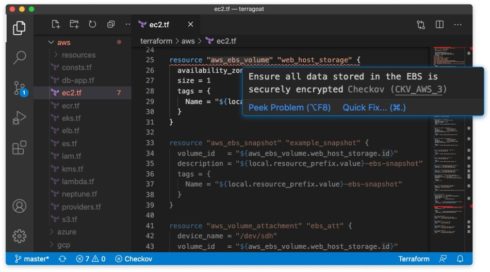 Bridgecrew has announced it is shifting cloud security left with a new solution that notifies developers about infrastructure as code (IaC) misconfigurations and policy violations early in the life cycle and directly inside their IDEs.

“While Bridgecrew’s mission is to ensure infrastructure security at every stage of the development lifecycle — from code and build, through deployment, and into runtime — the earlier you catch issues, the less headaches you’ll have later down the road,” said Barak Schoster, the CTO and co-founder of Bridgecrew. “This is shifting security as early in the lifecycle as possible, directly into the developer’s IDE where they spend most of their time.”

There are also many new updates coming to PyTorch libraries including TorchCSPRNG, TorchVision, TorchText and TorchAudio.

Software providers can use Lightrun to get live production data from software that’s installed on their customer’s site and eliminate the need for customers to get stuck in the troubleshooting process, according to the company.

Lightrun offers features such as the addition of logs, virtual “breakpoints,” and metrics during runtime, as well as many performance management integrations. Built-in security includes ISO 27001 certification, encryption, RBAC and SSO, audit trails and logs and privacy blocklisting.

SmartBear completes investment transaction
SmartBear announced that Vista Equity Partners closed their investment in the company to team up and “accelerate growth, promote innovation, and expand the business in support of the rapidly growing DevOps market,” SmartBear wrote in a post.

“We completed 2020 with another record year of growth and are thrilled with the support  and partnership we now have from Vista and Francisco Partners to broaden and strengthen our product offerings and also identify continued organic and inorganic growth opportunities,” said Frank Roe, the CEO of SmartBear.