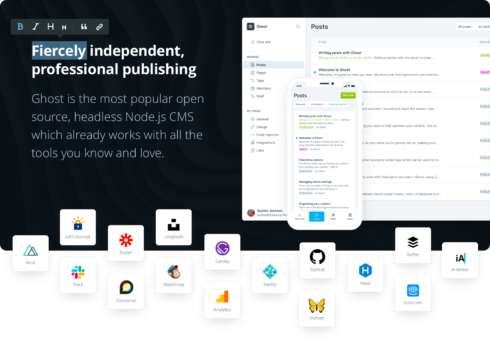 The open-source blogging CMS with a modern intuitive editor and built-in SEO features just reached version 3.0. Ghost 3.0 integrates publishing<>subscriptions, which allows anyone to build a recurring revenue subscription business. The tool is managed by the not-for-profit Ghost Foundation.

The developers of Ghost explained they embrace the JAMstack movement, which prefers to generate a static site and then bolster it with dynamic features, instead of making a dynamic app from the ground up.

“This new architecture unlocks content management that is fundamentally built via APIs, webhooks and frameworks to generate robust modern websites. We’ve expanded everything Ghost can do in this space as a headless CMS, including detailed content APIs, admin APIs and custom integrations,” the Ghost team wrote in a blog post.

For those looking to transition content from a WordPress site, the new release introduces a plugin that provides a single-button-download of your full WordPress content + image archive in a format which can be dragged and dropped into Ghost’s importer, according to the team.