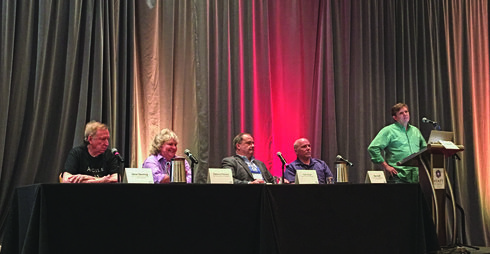 Agile has been around for more than a decade, but is the agile of yesterday still relevant for the agile of today or tomorrow? It is a question industry thought leaders explored at the recent Agile 2016 conference in Atlanta.

Jim Newkirk, vice president of cloud development at CenturyLink and the moderator of the Agile 2016 industry panel discussion on agile trends and future directions, asked what some would call a dangerous or loaded question. He asked the panel what they would change, if anything, in the Agile Manifesto. When the original authors of the manifesto were asked if they would change anything now, years after they had written it, Ward Cunningham joked he would change the font, but the consensus was they felt it didn’t need to be changed.

Steve Denning, author and independent management consulting professional, jumped in to defend the Manifesto, saying that it wouldn’t make sense to go back and redraft it. Denning compared it to the U.S. Constitution or Declaration of Independence, saying it was a historical document, but he does believe that we have gone beyond the Manifesto today.

“We learned a great deal since 2001, so to suggest that we have nothing to add to the Manifesto is kind of ridiculous,” said Denning. “But on the other hand it is a historical document.

“Don’t change the Manifesto, but keep learning,” he went on to say.

Rebecca Parsons, CTO of ThoughtWorks, echoed Denning’s sentiments that she wouldn’t change the document, but she does think it is important for the industry to continue to revisit the manifesto and make sure that it is being used to reflect today’s current thinking. She put this question out at the panel: If we are continuing to change what agile means to us based on our own learning, who would even have the authority then to change the Manifesto?

Ray Arell, founder of and principal coach at nuCognitive, believes that just because we don’t change the Manifesto itself doesn’t mean we can’t change what it means to our own organizations. “We have to get to the space where we can modify, change, and come up with what fits in our organization,” he said. “Changing the document is not going to change the fact that everyone is being iterative.”

Arell also went on to explain that the problem is not with the Manifesto; the problem is that a majority of the community still hasn’t even seen it. According to him, when you ask agile teams to name any one of the principles, a majority of people won’t have an answer.

“A lot of people don’t know what is in the document,” he said. “I don’t think we are reinforcing it enough.”

And if we aren’t reinforcing it enough, and if people aren’t adhering to it, how can we change the document in the first place, wondered Tom Grant, senior consultant at Net Objectives. While He doesn’t believe the Manifesto should be held up to the Constitution, he does think it still stands up the way it is today—other than a missing sentence about implied negative space.

However, he does say we shouldn’t hold it to such high standards that we can’t change it. “We weren’t trying to kick off a movement where there was going to be an absolute straitjacket of this is how you do it,” he said.

One of the problems with changing the document is that there is not one definition of agile, according to the panelists. But when asked if we should come up with a common definition, the panelists didn’t seem to think it made sense just to have one definition.

According to Denning, the concept of agile is interpreted in different ways, and how it is applied is also going to be different, so it would be difficult if not impossible to come up with some short generic paragraph. The importance, according to him, is to grasp the values, practices and principles, and to put boundaries around what we are talking about.

Newkirk also asked if agile was even the right term anymore, knowing what we know today. “Everyone wants to be agile,” Newkirk said. “Nobody wants to be brittle, slow, [or] rigid, but a lot of people don’t know what it means to be agile.”

Room to grow
According to Denning, the word “agile” is making a huge comeback. In 2010, agile had a bad “smell” associated with it such that nobody wanted to talk about it. “When I wrote my brook, I called it radical management as a way of starting the discussion with general management people who were willing to talk about a new way of doing management, but not really willing to talk about agile,” he said. Today, with agile going beyond the software world and having so many proven benefits, he believes we should stick with the word and not stray off into other terminologies.

ThoughtWorks’ Parsons doesn’t believe in “the power of words,” because while of course no one wants to be brittle, some people want to be stable and reliable. “There are some opposites of agile that are appealing to people,” she said, although she admitted she has not been able to come up with a better word.

“Agile has a certain brand cache that it would be hard to come up with something different now,” added Net Objectives’ Grant.

When it comes to agile as a whole, the biggest barrier to adoption Arell sees is being able to adequately express what agile means to executives and other people in the industry. Businesses need to start looking at organizational design, how they talk about values and principles, and how they scale them throughout the entire organization. It’s not that there are two sets of values: one for the development team and the rest of the business. It is one set of values, he explained.

There needs to be more strategic alignment within an organization, Grant added. According to him, there are still too many people in an organization that don’t know what the primary goal of agile is. The business needs to talk about what it wants to get from agile otherwise there will be friction within the culture, as well as an overwhelming amount of choices.

One of the most common barriers ThoughtWorks’ Parsons runs into is with individuals who believe everything was okay the way it was before. According to her, people are afraid to come to agile because of the risks and additional costs, but the world of estimate reliability, precise costs, and precise ROI doesn’t exist anymore. “The sociological barrier is getting people to understand that the world maybe existed in the 1960s, but hasn’t existed for a long time,” she said. “You don’t want to know 18 months in advance exactly what you are going to be delivering because in 18 months you aren’t going to want it.”

Denning believes we need to get back to the purpose of creating value for customers, and away from shareholder value. “Shareholder value is the result, not the goal,” he said.

How to build a platform for business value