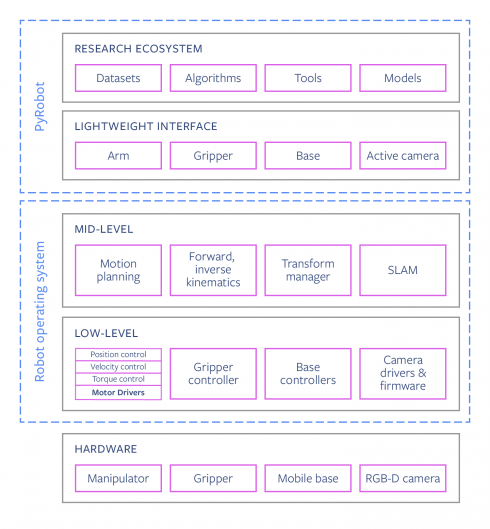 Facebook wants to accelerate AI robotics research with the open source release of PyRobot. According to the company, the project is designed as a framework and ecosystem that enables AI researchers and students to mobilize a robot in just a few hours, without specialized knowledge of the hardware or details such as device drivers, control and planning.

The company hopes PyRobot will make the same impact PyTorch has in the artificial intelligence world. PyTorch has helped accelerate AI subfields such as computer vision and natural language processing, Facebook explained

“Robotics is important for advancing AI overall, because it enables researchers to explore challenges like teaching machines to learn predictive models and develop ;commonsense’ knowledge in the real world. Solving these problems will lead to more capable AI that could one day be useful for applications like intelligent assistants. With its flexible, open design, PyRobot will help Facebook AI researchers and others in the field accelerate progress toward these goals,” Facebook’s research manager Abhinav Gupta and research scientist Saurabh Gupta wrote in a post.

PyRobot is the result of a collaboration with researchers from Carnegie Mellon University. It consists of an interface on top of the robot operating system (ROS), and provides a set of hardware independent APIs to control different robots.

The company explained the framework provides a range of utility functions for all robots that are built using it. Actions include joint position control, joint velocity control, joint torque control, Cartesian path planning, forward kinematics and inverse kinematics (based on the robot URDF file), path planning and visual SLAM.

“PyRobot provides an easy way to use AI and ML algorithms with robotics. For example, one can use the interface with a physical robot to collect data for a task such as grasping, train a deep learning model using PyTorch, and then execute the algorithm on the robot using PyRobot,” the researchers wrote.

Facebook’s major goal in open sourcing the project is to help researchers bring the total amount of time it takes to set up a functioning robot from weeks down to hours.

“A common joke in the robotics community says you add one year for every robot you touch in your PhD thesis. PyRobot addresses this challenge by providing a common API across multiple robots and simulators. Using a robot is as simple as writing a “from pyrobot import Robot; bot = Robot(‘locobot’)” command,” the researchers wrote wrote.

PyRobot aims to make it easier for the research community to use robotics data sets, algorithm implementations, and models, and also help them set benchmarks, compare their work, and build on each others’ results.

Facebook plans to include new simulators such as AI Habitat, Gibson and MuJoCo to extend PyRobot’s functionality.