The computer science industry has lost another pioneer. This time, it was a man who had a vision of artificial intelligence, something that is currently impacting the advancement of technology and software.

Marvin Minsky, a professor at the Massachusetts Institute of Technology, died on Sunday night in Boston at the age of 88, according to The New York Times.

He helped create the field of artificial intelligence, and his contributions demonstrated that computers were more than just machines and that they could be built to have some learning and reasoning capabilities.

(Related: AI system has the wherewithal to play chess)

Minsky saw no difference between humans and machines or their thinking processes, according to the Times. In the 1950s, he started working on computational ideas to characterize human psychological processes, and he produced theories on how to give machines intelligence.

The lab that he created has impacted today’s computer industry. It started with the idea that digital information and code should be shared. Today, the open-source movement is a central part of the software industry, and is part of the overall culture of computer science.

During his time, Minsky built some of the first visual scanners and sensor-laden mechanical hands. In 1951, he built the first randomly wired neural network learning machine, which he named SNARC. In 1956, at Harvard, he invented the first confocal scanning microscope, an optical instrument with resolution and image quality still used in biological sciences.

His own intellect was wide-ranging, and his interests were eclectic. While earning a degree in mathematics at Harvard, he also studied music and as an accomplished pianist. He would later delight in sitting down at one and improvising complex Baroque fugues.

Minsky was awarded the Turing Award in 1970, computer science’s highest prize, according to the Times.

Admirers on Twitter have expressed their appreciation and affection toward Minsky. Satya Nadella, CEO of Microsoft, tweeted, “You don’t understand anything until you learn it more than one way. Remembering the life and contributions of Marvin Minsky today…”

A columnist named Nick Bilton tweeted, “His work is going to have an everlasting effect on the next century.”

Dustin Miller, a developer and founder of SharePoint Experts, said, “Machine learning, NLP, prediction-making, anomaly detection—they’re going to be on everyone’s radar, especially as more and more stories come out about Facebook’s ‘M,’ or Google Inbox’s deep-learning-based auto-reply feature. With Marvin Minsky‘s passing making the nerd-news rounds, the topic gets another little nudge.” 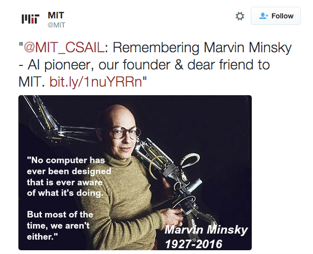