CeBIT 2015: All things development for Big Data, IoT and security

Hannover, Germany — “There are now as many pieces of digital information as there are stars in the universe.”

That statement from the opening ceremony CeBIT 2015, held earlier this month, means that developers have their work cut out for them. IoT, Big Data and security were major themes at the event, which has successfully refocused itself into a B2B venue and become much stronger as a result. In addition to technical growth, attendees watched history in the making.

Li said that for China to progress in the international marketplace, all nations (including China) need to build a framework for cooperation. He announced that he was initiating his effort to develop this framework by negotiating new levels of cooperation with Germany, starting in 2015. 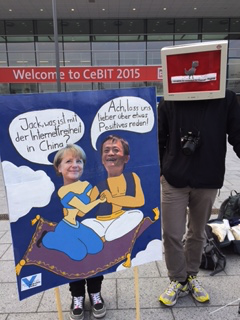 China’s Vice Premier Ma Kai followed with a first-ever call for international standards and guarantees for data security, saying this was the only way countries will be able to drop barriers to trade. He went further by calling for stricter rules, not only on data privacy, but on protection for intellectual property as well. He noted that China needs to open itself to outside countries, but that this open policy needed to be met with mutual respect for the security of all parties.

Alibaba CEO Jack Ma told the audience that the future of the world will be supported by data, not oil, and he predicted that women will become a larger part of the workforce because the solution must be founded on wisdom. He said that the dreams behind the technology will drive the change in the world he sees coming. 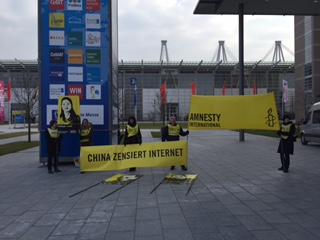 Closing out the ceremony, Germany Chancellor Angela Merkel called 2015 the “Year of Cooperation.” She promised to eliminate or reduce barriers to trade between the two countries, and restated Ma’s call for greater data security for all.

Merkel also announced a new effort to bring broadband Internet access of at least 50Mbit/s to all of Germany. She said that new bandwidth would be achieved through spectrum auctions and that rural areas would be serviced through high-speed wireless connections. In line with the access for all effort, Merkel also called for changes in German and EU laws to allow universal deployment of public WiFi, and called for free public WiFi in public spaces throughout Germany.

CODE_n Startup Incubator
Financial technology consultancy giant GFT created the platform in 2011 to nurture new, exciting technologies and provide opportunities to them, such as exposure to investors and large, corporate partners. Since its birth, CODE_n, which stands for “code of the new,” has come a long way.

Security for the Internet of Things was big. Novi has developed a self-contained, multifunction IoT alarm that is motion-sensitive and can deliver remote monitoring capabilities. The alarms can be networked for business, rental or home use, or they can operate standalone. There are tens of thousands of lines of code that run from the base station, which can support up to 10 alarms, through a sensor to a user-monitoring and reporting application.

Another cool IoT security startup, Dublin-based Evercam.io, created a means of integrating standard IP cameras and other IP devices into the IoT by building a network that interfaces with them. The system can scale to cover large installations such as apartment buildings and factories.

Originally, writing interface software for each device was a nightmare because each was developed in a closed architecture. SDKs had to be procured for each, and NDAs had to be signed. Evercam recognized this barrier and developed a universal API, which it uploaded to the cloud. If developers are in the HTML world, problem solved.

Morfa stands out from other modern programming languages because of its support for user-defined operators: A programmer may turn every valid identifier (including Unicode letters and symbols) into an operator with associativity and precedence of their choice. User-defined operators can be bound to functions as well as type constructors. It also provides support for programming with templates. Spokespeople say it’s similar to C++. Morfa can be used interactively, similar to MATLAB, Python or R.

Big Data developers will appreciate BigBoards CVBA. The company bills its portable disk cluster, Hex, as being able to take developers “from zero to Big Data in less than an hour.” It comes pre-assembled, so developers only need to power it up and connect it to their workstation to have their entire data center at their fingertips. A set of integrated tools with dashboards monitors the cluster, and a library of Tints (pre-packaged technologies like Hadoop and Elasticsearch) open datasets like Wikipedia data dumps, and tutorials are downloadable for running distributed programs.