The popular crowdfunding site Kickstarter has announced it is bringing its Android and iOS apps to open source. According to the Kickstarter engineering team, while building and maintaining features for their apps they have adopted functional programming techniques and written well-tested code. They decided to open-source the apps to share their experience and benefits with the rest of the developer community.

“We started thinking about how we could embrace that principle as engineers. We believe that open-sourcing will not only give a new level of transparency into our engineering culture, but will also provide useful resources to the global developer community,” wrote Brandon Williams, engineer at Kickstarter, in a blog post.

Some features include screenshots of various screens in various languages, devices and edge-case states; view models that isolate side effects and focus on functional core; Swift Playgrounds for iterative development and styling; and pull requests. According to the team, the first pull requests include updating the design and functionality of user profiles.

“We’re excited be working in the open and able to share the cool things we come up with more freely, and the challenges we face more honestly,” Williams wrote. “There are quite a few things we look forward to in 2017, including writing our first Kotlin code in Android, exploring new ways of writing declarative views and, of course, the big Swift 3 migration.”

Top trending projects on GitHub…?
GitHub’s trending “this week” tab has been broken and/or slow these last couple of weeks! We will let them know so we can continue to give you this great list. We can only imagine FreeCodeCamp is still on the Top Five somewhere. 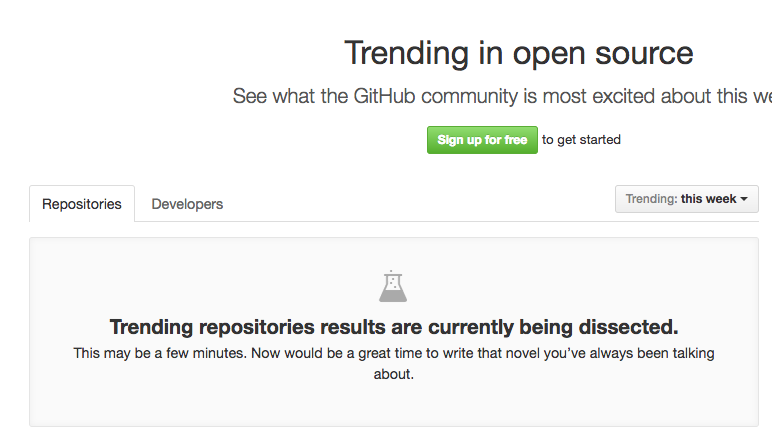 In the meantime, check out some of these other interesting projects from GitHub: