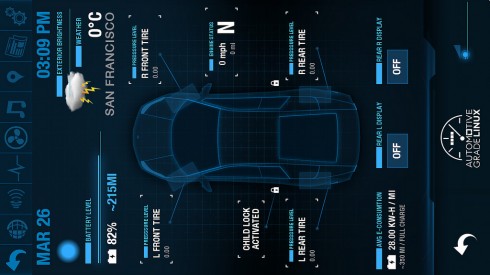 Automotive Grade Linux, a Linux Foundation project to develop a Linux-based software stack and platform for connected cars, has released its first version for download.

The Linux Foundation announced the release of the fully open automotive platform in a press release. AGL is an open-source reference platform built on top of the open-source Tizen IVI (In-Vehicle Infotainment) project, adding applications developed in JavaScript and HTML5.

Along with the release, the AGL project released a slideshow of the platform’s interface and features, including a home screen, dashboard, media playback, audio controls, and Google Maps integration.

Microsoft Language Portal lead international project engineer Palle Petersen announced the new API in a blog post. He explained that the new version is part of the company’s effort to develop apps for a global audience, as part of the Universal Windows Apps strategy announced at the Build conference in April to use the UI and terminology of the Microsoft Language Portal across Windows Store, Windows Phone and Windows desktop.

A few important upgrades to the API:
• Support for “any-to-any” language translation searches. The old API was restricted to using English as either the target or source language.
• String case and hotkey sensitivity search filters. There is a new GetTranslations method parameter allowing specifying the sensitivity level.
• Filtering out undesirable string results due to hotkeys, so searches can ignore or match strings with hotkeys. Both string case and hotkey features will soon be added to the Multilingual App Toolkit as well.

Microsoft shuts down No-IP domains in anti-malware operation
Microsoft has executed a massive operation to disrupt subdomains spreading malware through its systems, but in doing so knocked out more than 4 million harmless hostnames.

The takedown was successful, but in the process severely disrupted legitimate users using No-IP’s dynamic DNS. According to a No-IP blog post on the takedown, Microsoft’s attempt to filter out the 18,400 malicious hostnames while leaving normal traffic unaffected was unsuccessful. Microsoft infrastructure was unable to handle the billions of No-IP queries, leaving approximately 4 million hostnames offline.

Knocking out legitimate hostnames was not the only collateral damage of the anti-malware seizure. According to Kaspersky Labs, the operations also disrupted two families of government-sponsored malware currently active in cybercrime operations.

Of the 18,400 malicious hostnames targeted by Microsoft, No-IP was able to find approximately 2,000, No-IP marketing manager Natalie Goguen told Krebs on Security. “So, to go after 2,000 or so bad sites, [Microsoft] has taken down 4 million,” she said.