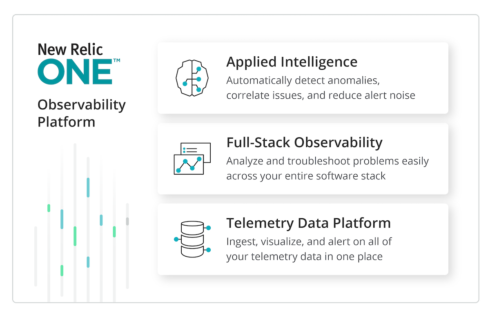 According to the company, New Relic One has become an expanded observability platform comprised of three products: the Telemetry Data Platform, Full-Stack Observability and Applied Intelligence.

The telemetry data platform is designed to be “the single source of truth” for all operational data. It is where application and infrastructure data is collected, analyzed and alerted on as necessary, the company said in a statement announcing the platform update.

APM is now “only one piece of the puzzle,” Bill Staples, chief product officer at New Relic, told SD Times about the release. “We’re radically reimagining our business, everything from our product packaging, our pricing, our user experience, and the way we talk about New Relic is all changing.”

For the first time, Staples said, New Relic customers will have the ability to ingest all kinds of operational data — everything from metrics, logs, events and traces — from any system and put it all in one place, while giving developers full-stack visibility as well as artificial intelligence and machine learning on top of it.

Many organizations use a myriad of monitoring tools — many of them open source —  to gain insights into their systems, hoping to respond quickly to application failures and even predicting anomalies before they occur. But the ease with which organizations can onboard those tools creates an unwitting level of complexity. New Relic’s approach is not to replace those open-source tools, but to be a place where the data from those tools can be correlated and acted upon. In today’s world, Staples said: “The engineers, in the middle of an incident that’s going on, are jumping between all of these systems to figure it out. And, there’s not the ability to correlate because each of these systems have data in a different place.”

New Relic is aiming the evolution of its platform at software developers. Staples said, “We think of observability as so fundamental to the engineering experience.” To that end, the company has announced a perpetual free tier to software developers that includes:

The company, he explained, is eliminating the financial and technical barriers that hold organizations back from achieving full observability, which he said will help customers — who struggle with data silos and tool sprawl — gain a better understanding of their digital systems.

“Customers are excited by the ability to bring it all into one place,” Staples said. “It shows promise in terms of consolidating tools. They’d rather pay one vendor to get access to everything rather than getting all these separate bills exploding at rates they can’t always understand.”