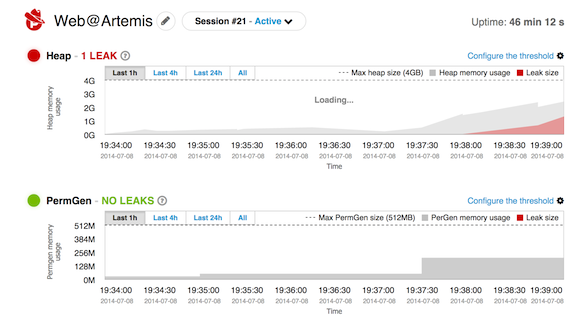 When Plumbr was founded two years ago, the intent of the company was to help developers solve memory leaks in Java applications.

“The promise was simple: Whenever you have a memory leak, attach Plumbr and find the cause of underlying problem in minutes instead of weeks of troubleshooting and experimenting,” said Ivo Magi, cofounder and product manager of Plumbr.

But as time went on, Plumbr realized its tools might have taken the wrong approach. “Having developers as our target audience, Plumbr was not attached to systems where it can provide the most value,” said Magi. “We were not used to monitor production environments, meaning that whenever the issues surface in production we were not present to offer the solutions. This eventually rendered Plumbr to become a shelfware. This is a place where a good software provider does not want to end up.”

Plumbr recently released the latest version of its Java memory leak protection tool, Plumbr 4.4, designed to transition the company from an application troubleshooting tool to an application monitoring tool.

“Instead of a troubleshooting tool for developers, we needed to become a monitoring tool for operations people. What sounds easy was in reality nine months filled with getting to know the operations teams, understanding their problems and figuring out how to package our solution to match the expectations,” said Magi.

With Plumbr 4.4, Plumbr gives users the ability to detect garbage collection issues and locked threads, confirm there aren’t any problems, access the history of JVMs and assure operations are performing as they should.

In addition, Plumbr has built a knowledge base consisting of tens of thousands of different performance issues, in order to provide workarounds and solutions for issues that surface.

“This change built the foundation for the future. We work hard to become the solution system administrators would always want monitoring their production JVMs in order to make sure the Java applications are performing according to your expectations. And whenever the systems fail upon such expectations, our root cause detection algorithms enable to apply the solution immediately. To reach there we have a lot of more to cover—our current set of detected problems is just the beginning,” said Magi.