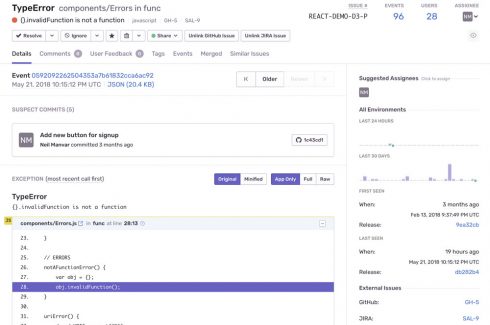 The open-source APM solution for developers has released version 9.0 of its platform.  Sentry 9 is designed with new ways to cut the time required to resolve application errors.

According to the company, the latest release turns application errors into iterations that can be addressed and resolved within the current workflow.

About 90 percent of software issues are a result of errors in code, Sentry explained. Despite this, monitoring tools typically focus on systems and infrastructure concerns, rather than on application issues. This forces development teams to spend a significant amount of their time investigating the details of every issue, the company said

By automatically aggregating errors and adding context in real time, Sentry says product teams can resolve issues before customers even experience a problem. The tool shows who wrote the code, when it was written in the release history, where it is in the stack trace, and what application logic is broken.

In Sentry 9, issues can be connected to specific teams that have the specific knowledge needed to resolve the issue best. It can also assign teams to specific issues in order to improve triage ability.

In addition, it now connects each issue to the commit that initially introduced the bug. It also enables developers to quickly understand where in the lifecycle an issue occurred by aggregating issued based on environment. Finally, with advanced integration with Slack it can send specific alerts to certain channels based on context.

“Modern engineering teams understand that code in production needs to be as close to bug-free as possible so it can meet the demands of users around the world,” said David Cramer, CEO of Sentry. “No release is without dependencies, so looking forward to production at every stage of development is the most effective way to avoid breaking your app and tying up your org for hours or days. Sentry is building a platform that reduces application issues in a way doesn’t disrupt, but ultimately increases, the speed and quality of development.”

Sentry also announced a $16 million series B round of funding led by its existing investors NEA and Accel. According to the company, this round of funding will support the company’s growth with more than 9,000 paying customers, tens-of-thousands of engineering organizations, and half a million developers using Sentry.

“Sentry’s growth is a testament to the now-universal truth that app users everywhere expect a flawless experience free of bugs and crashes. Poor user experience kills companies,” said Dan Levine of Accel. “In order to keep moving forward as quickly as possible, product teams need to know that customers will never leave because of a broken app update. Sentry lets every developer build software that is functionally error-free.”