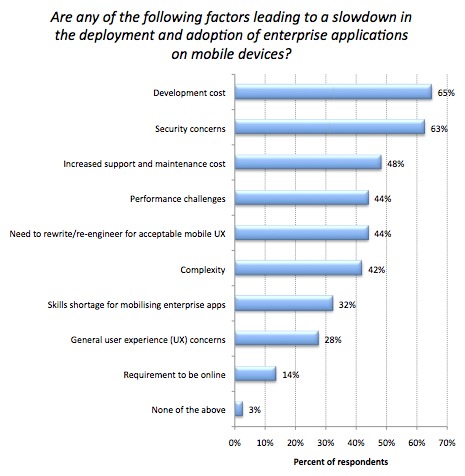 Enterprise mobile app developers continue to grapple with many of the familiar dilemmas for creating apps that will best serve their organizations in the next year and beyond. As in any year, developers will be looking to increase the productivity of their organization’s employees (and perhaps partners) who are using the app, which can be no small task in an enterprise world that often demands a potentially unwieldy myriad of app features.

Every business will still have the goal of making enterprise app development quicker and more cost effective. Recent trends in making apps that are multi-channel and built for mobile will also continue, with agile development approaches sure to see even more uptick.

But what issues are going to be top of mind for enterprise app developers in the next 12 months? Potentially plenty; I’ve narrowed it down to four parts of the app dev process.

Different platforms. Different devices. Different apps?
In conversations with enterprise app developers, the obstacle that kept surfacing was the challenge of delivering apps for multiple devices and platforms. Developers continue to debate different creation and deployment methods, but key trends have emerged around the three main routes of developing for (and choosing between) native, mobile Web, and hybrid applications, as well as the scenarios under which each of those approaches make the most sense.

Native apps lend themselves to a rich user experience, having been built specifically for the hardware in question (with the downside of most often requiring dedicated teams to build separate versions of the app for each specific supported device). Mobile Web apps written in device-agnostic HTML5 tend to be best for enterprise applications that benefit from rapid iterations and adaptations, and they have the advantage of allowing developers to code once and deploy to multiple platforms. Hybrid apps aim for the best of both worlds, combining the device-level advantages of native development with the versatility of developing for mobile Web.

Look for 2015 to be the year when we really see a shift toward the reality Google’s Larry Page predicted when he said, “In the very long term, I don’t think you should have to think about, as a developer, ‘Am I developing for this platform or another,’ or something like that. I think you should be able to work at a much higher level, and software you write should run everywhere, easily.”

Unique to enterprise: The offline experience
Maintaining access to mobile networks or the Internet is still an all-too-common issue for today’s travelers. For vacationers, this might just mean holding off on Candy Crush for a few hours. But for a globetrotting workforce, it becomes a critical issue for which enterprise app devs increasingly need to prepare.

With always-on access never guaranteed, how can enterprise app developers insert offline capabilities into their apps without making development overly complex, resulting in a clunky, slow app? The kind of data syncing that makes a high-quality offline experience possible requires back-end services that can be difficult to build.

Depending on the development platform being used, many Mobile Backend-as-a-Service (MBaaS) providers may be good choices for integration. These MBaaS providers can also alleviate the costs and complexities of investing into the necessary sync servers. Aligning the required services and tools to make apps that perform quickly (even when offline or out of network) can pay dividends in employee productivity and reduced frustration, as data is now synced ahead of time through background threads and is ready when the user requires it.

Can enterprise app dev costs stop being prohibitive?
Each year, budgets are always a popular point of discussion. A recent Mobile Helix survey found that 65% of decision-making IT executives cited development costs as the largest contributing factor for slow development and adoption of enterprise applications on mobile devices. The same survey found that almost half of respondents were concerned that building a mobile app would increase support and maintenance costs.

In an industry environment where costs are a top-of-mind limiting factor in mobile enterprise app development planning, 2015 should see the advantage go to platforms and tools that are transparent in their pricing and value—something that has been an issue in the industry. In this cost-saving vein, efficiency remains a challenge—and an opportunity. App design decisions, such as narrowing the scope of the app to a single “business object” and a limited number of tasks, can save on development costs while also adding efficiency and better performance for the employee.

A related efficiency target is making use of contextual information (e.g. using features like GPS to automatically complete location information or leveraging the mobile device’s clock to fill in date and time stamps), which saves an employee’s time and translates to business value.

Developers are ready for the Internet of (Enterprise) Things
A fascinating frontier in enterprise mobile app development and the technology world in general is the arrival of the Internet of Things. The IoT will take apps beyond their mobile devices, allowing clever developers to consider the external sensors and networked devices that might be applied to enterprise environments to transform processes in ways never before possible.

Of course, enterprises have used many of the sensors and robotics that represent the IoT before now, but this dawn of widespread Internet of Things use means the technology will be much more sophisticated and affordable.

The shift from developing apps that run on a single device to thinking of apps running across many connected devices will place extra weight on the cross-platform side of development considerations. IoT apps will collect data from a range of sources and stay with the user across devices. Apps allowing users to interact with interfaces that display relevant information and controls based on location or sensor input will revolutionize certain processes, as will the fast access to crucial data made possible by interconnected sensors and devices. Users will be able to extract themselves from processes in new ways, and enterprise applications enabling machine-to-machine interactions may require a human only for certain management duties.

When it comes to mobile app development, enterprises should position their resources and infrastructures in preparation for merging smartphone-based solutions with support for upcoming IoT applications. The companies best prepared for these foreseeable transitions will be the ones to thrive in 2015 and beyond. 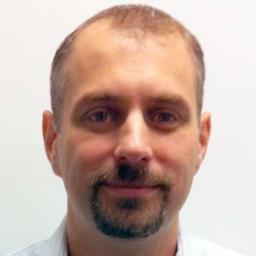 Mark Kirstein is the Senior Director of Enterprise Software for Zebra Technologies. He works closely with Zebra’s RhoMobile Suite.

View all posts by Mark Kirstein