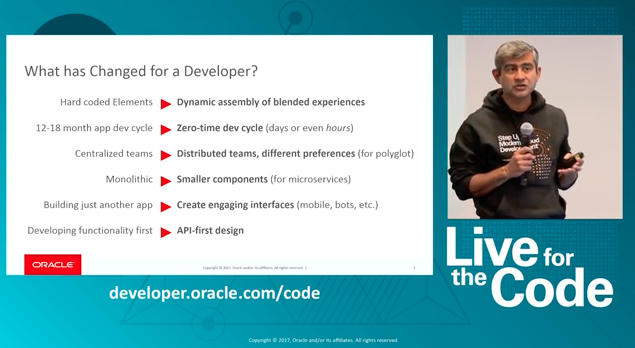 Modern application development is not just about cutting down the time it takes to deliver software. It is about the ability to adapt, innovate, compete, and move forward in a faster manner, according to Amit Zavery, senior vice president of product development at Oracle, who spoke at the Oracle Code developer event in New York yesterday.

Thankfully, this new modern application development way of working comes with evolving tools and technologies to help businesses and developers keep up. “It is a very exciting time for developers today. When we were building applications many,many years ago, a lot of technologies which we would have liked to have were not available,” said Zavery. “Over the last 4-5 years, the technology and stack as well as choices has evolved drastically.”

It’s a new era of software development. The days of 12-to 18-month development cycles, monolithic applications, hardcoded elements, and centralized teams are gone. Today, if businesses want to succeed they have to develop faster and more often or get left behind.

“Either you will end up taking advantage of this [new way of working], disrupt yourself, and change the paradigm of how you interact with your users or someone else will come along and take your user base,” said Zavery.

In order to develop a modern application, Zavery says it has to be

Other modern app development requirements, according to Zavery, include DevOps tools, performance monitoring, and containerized applications.

Oracle recommends a cloud platform because it allows developers to focus on their application rather than setting up, installing, managing and configuring infrastructure. “The cloud is becoming a delivery model, but also gives developers a lot of benefits that help them get out of a lot of pain they used to have before,” said Zavery.

According to, Siddhartha Agarwal, vice president of product management and strategy at Oracle, a tool should also be able to scale, adapt and provide things like backup recovering, packing and upgrades. It should allow the business to engage with their customers in real-time by providing the ability to filter massive amounts of data into valuable insight, and the ability to identify issues early in case something goes wrong. In addition it should ensure data is encrypted both at rest and in motion.

“Whenever choosing any platform, users need to understand what they are risking with it,” said Zavery.