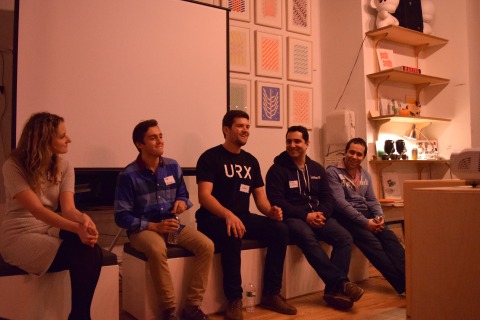 Deep links are a way to realize the full potential of user experience and mobile commerce through intuitive app connections. It’s a rapidly developing space, with startups like URX and Deeplink as well as tech giants like Google and Facebook going all in for the future of mobile.

In a trendy little event space in Manhattan’s Chelsea neighborhood on Wednesday night, startups, developers and curious bystanders met to discuss deep linking, the business interests driving it, and the challenges the technology faces, at Deeplink.NYC.

(Related: Deep Linking: The foundation for a new mobile Web)

The event, hosted by Eniac Ventures, was one of the first to put several of these deep linking, app search and mobile commerce companies in the same room. Four startups—Deeplink, URX, Button and Wildcard—talked deep linking, demoed their apps and APIs, and hosted a forum moderated by Google’s Vera Tzoneva, who heads up strategic partnerships for Google Now and App Indexing, Google’s own mobile deep linking effort.

Each company is tackling a different piece of the puzzle, filling in the gaps of what they all agreed is a mobile Web and user experience that’s not nearly good enough.

URX is focused on simplifying the deep linking process for developers with its App Search API. CEO John Milinovich likened URX’s aspirations to a Google AdWords of sorts for apps, getting deep linking to the point where an app linked inside another within the UX isn’t perceived as an ad, but as a natural intra-app user flow.

Then there’s Button, a startup founded by two former Venmo employees, which is laser-focused on using deep links to drive cross-app acquisition and retention for mobile commerce. Button’s demo took a user through an on-demand deep linked pathway. It started with making a dinner reservation on reservation app Resy, straight into hailing an Uber car and having each app send timed reminders to the user about the other’s task. Don’t have either app? The deep link would facilitate what’s called an “intended installation,” using software called ‘AttendedInstall’ to bypass a key deep linking problem: the user needs to have the app installed for the link to work. The intended install removes the friction of going through the app store by allowing the user to download the app they need and to continue with their action, all within the first app.

Button cofounder Chris Maddern put it this way: “Our lives are a chain of linked app experiences,” and deep links are a way to make sure the chain doesn’t break.

Finally there was Wildcard, a startup that believes deep linking is only part of the equation. The other half of it, they said, is cards: mobile-optimized displays that render natively inside apps.

As Wildcard cofounder Doug Petkanics put it, deep linking alone isn’t enough. The mobile Web needs a new mechanism to display content. The UI functionality of cards is constant, allowing each to move around the mobile landscape from platform to platform. Then each individual app—be it service apps, content apps, shopping apps, etc.—decide how much information the card shows before prompting the user to download or continue his or her experience in the app itself, via a deep link.

By replacing traditional mobile Web browsing with card browsing, Wildcard posits, cards become the top of the funnel for app discoverability, shareability and portability. Deep links keep that user engaged in the funnel and ultimately convert and monetize them.

This could be especially useful on an emerging platform such as wearable devices. On a smartwatch’s screen, rendering a typical mobile Web page doesn’t work. A card, however, is both static and portable enough to be the perfect delivery mechanism of wearable app content.

Wildcard is barely out of stealth mode, but with both a newly released card browser app for end users along with card-based developer tools, it has the potential to blow up fast.

The next steps for these companies and deep linking in general, the Deeplink.NYC panel members agreed, are more cross-app partnerships. During the discussion, representatives from the four startups and audience members, speaking for companies and apps like Foursquare and JackThreads, talked about how the mobile commerce focus on app downloads is only temporary. The Web model doesn’t fit into the native interoperability trend in mobile development, and mobile companies must be prepared to refocus around capturing and monetizing user intent by weaving apps together through cross-app partnerships on the business side and deep links on the technical side.

What about standards?
Most of the evening was full of excited conversations and presentations full of possibility, but the panel did ultimately broach the topic of the biggest catch with a technology as new as this: standards.

Deeplink cofounder Noah Klausman explained that Deeplink works across all standards; URX’s Milinovich said their API is designed to work the same way. Yet Klausman also addressed the elephant in the room: Each company calls themselves a standard, but Google’s spec driving users to Google, Facebook’s to Facebook, etc., means that by definition they’re not.

“It would [benefit] all our companies if there was a standard,” Klausman said.

Standards are but one of the challenges facing deep links, cards or whatever other technologies may emerge to serve as the foundation of a better, smarter Web of interconnected mobile apps. The direction, though, is clear. The event ended with a remark to which both the startups and audience members immersed in this cutting-edge mobile technology all nodded agreement:

The smartphone is not very smart right now, but it will be.