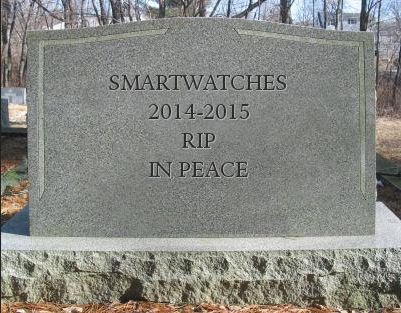 The Apple Watch, arguably the best-funded and most integrated product in the wearables market, is still getting mixed reviews. Most of the rest of the products are just noise in comparison. So how hard is it to get a smartwatch right?

It seems pretty simple: Just take some of the stuff off the phone, put it on the watch, and make the result attractive right? Well, not only is the devil in the details, it isn’t even clear we want this crap on our wrist. Here is the problem and why no one, not even Apple, may get it right this round.

Watches are obsolete
One of the ironic things about this effort, particularly from Apple, is that Apple spent most of the last decade systematically making watches obsolete. The time and date functions at the heart of what a watch has traditionally done well are now done very well by our phones. By the time the Apple Watch launched, the majority of young folks entering the market never had a watch, nor did they ever want one, and a broad cross-section of adults have given them up. Reversing this trend, which still seems to be accelerating, may be impossible.

Displays are too small
Back in the 1990s, we were making our phones ever smaller, and phone displays would have fit reasonably well on wrists. However, now we are aggressively growing the size of the screens on our phones, and we like them big. Putting a six-inch phone screen on our wrist just doesn’t seem viable, so a watch as a phone replacement has mostly gone out the window.

Developers really like the extra real estate on these new phones for their apps. Deciding what you want to give up to get parts on the watch interface can be a pain, and as a result it reduces the utility of the watch even as a cellphone accessory.

Talking into a watch looks stupid
One of the features of the Apple Watch is the ability to use it like a phone headset. The problem is we already have Bluetooth phone headsets that work really well, and while they can make us look a bit crazy, we are used to that now. Using the watch as a speaker-phone is only attractive to those that longed for a Dick Tracy walkie-talkie watch, and most of those folks are aging out of the market.

One other aspect is that while expensive watches can be passed down and last for decades, smartwatches, because of technology advancement, will only last a few years. This makes the folks that buy expensive versions look stupid, and making your richest customers look stupid isn’t a sustainable product model.

We don’t just talk
Many of us use our phones for text messaging much more than we use them for voice, and texting on a watch is not very comfortable or easy. Partially this is because of the small screen, but it is also where the screen is placed.

If you are carrying something, this places the weight toward your fingertips, where your hand is weakest. And if you are driving, this places the display away from your eyes, so you have to take your hand off the wheel to see it. Watches were never designed to be communications devices, and placement was more for status and appearance. A communications device requires different placement, but we still want that status and appearance, creating a painful conflict between where we should wear the device (inside our wrist) and where we want to wear it (like a watch).

The better answer is likely head-mounted anyway
If you think about it, the ideal place to put a wearable device is on your head. This frees up your hands and allows the display to be close to your eyes (and thus virtually far larger than it physically has to be), and it can incorporate a microphone and speaker in close proximity to your mouth and ears where they belong.

With a head-mounted product (particularly like Microsoft HoloLens), you can put in all the phone functionality and still get a better experience than you do with a phone, tablet and watch separately by using virtual keyboards, gestures and voice commands. You can also better do advanced functions like augmented and virtual reality. So the end game is likely head-mounted displays anyway, with watches being an interesting but unnecessary intermediate step.

The path to a great smartwatch isn’t really viable because we have been trained to do without watches by companies like Apple; the display they use is too small; talking to the watch looks stupid (with the folks paying the most looking stupidest); the placement on the wrist makes using it difficult; and there is better technology already coming to market. In short, the reason Apple is struggling is that there actually may not be a sustainable market for a smartwatch, which suggests the entire class may go the way of the pet rock in a few years.