Currently maintained by The Qt Company, a subsidiary of Digia, the Qt framework’s first release of Qt 0.90 took place on May 20, 1995. The company is currently preparing for the impending release of Qt 5.5 in late June.

Lars Knoll, Qt’s chief architect and maintainer, reflected on his 18+ years with the framework in a blog post. He talked about why the project’s roots in both open-source and commercial software make it unique, as Qt is currently offered in four versions: Community, Indie Mobile, Professional and Enterprise.

“From the beginning, Qt has been released with both open-source and commercial licensing options,” wrote Knoll. “Over the years, we have worked on expanding this model, and, nowadays, Qt is actually developed as an open-source project. In this sense Qt is actually in a rather unique position, having a strong ecosystem with passionate people, as well as a commercial entity behind it, which backs up and funds most of the development.”

The idea for Qt was born in 1990 by Norwegian co-creators Haavard Nord and Eirik Chambe-Eng, but didn’t ship its first public release until 1995. Qt began its development at Trolltech, which invested in building and extending the native application development technology and maintained the framework through its first four major versions up to Qt 4.0.

Nokia acquired Trolltech in 2008 and refocused much of Qt’s development toward mobile operating systems, while at the same developing more tools around the framework, such as the Qt Creator IDE and the Qt Quick GUI application module. Digia acquired the rights to Qt from Nokia in 2012, reverting the framework back to a user-licensing model and releasing Qt. 5.0 with a new modularized codebase supporting all modern mobile OSes. Digia spun the framework off into The Qt Company in 2014.

In an email to SD Times, Knoll said application development has changed a great deal over the past two decades, particularly around a more diverse selection of desktop, mobile and embedded OSes with touchscreens; introducing a new UI paradigm; and demanding more-robust APIs through frameworks such as Qt.

“Qt’s role has changed a lot over the last 20 years,” said Knoll. “It turned from a small framework to create user interfaces for desktop applications, to a large toolkit that contains everything you need to create applications and embedded devices. Usage of Qt has grown tremendously over the years, and we estimate that we currently have around 800,000 active developers using our tools.”

Qt 5.5 adds new features and application development capabilities around Qt Core, with expanded Bluetooth, GUI, multimedia, NFC, networking, WebEngine and WebView features, along with new modules supporting 3D graphics. Barrios said The Qt Company is committed to developing and growing the framework for desktop and mobile platforms while looking ahead to the future of embedded devices.

“Qt is at its heart a cross-platform framework,” said Knoll. “The cross-platform nature is one of its inherent strengths. It helps us keep our APIs and implementations clean and future-proof. Having said that, the embedded side with our ‘Qt for device creation’ product will be one of our focus areas moving forward. We see a lot of growth potential with our embedded offering in a world where more and more devices are being connected and are having touch-based user interfaces.”

More details about Qt’s milestone are available on the Qt20 page, and a more detailed timeline of the framework’s development over the years is shown in the infographic below. 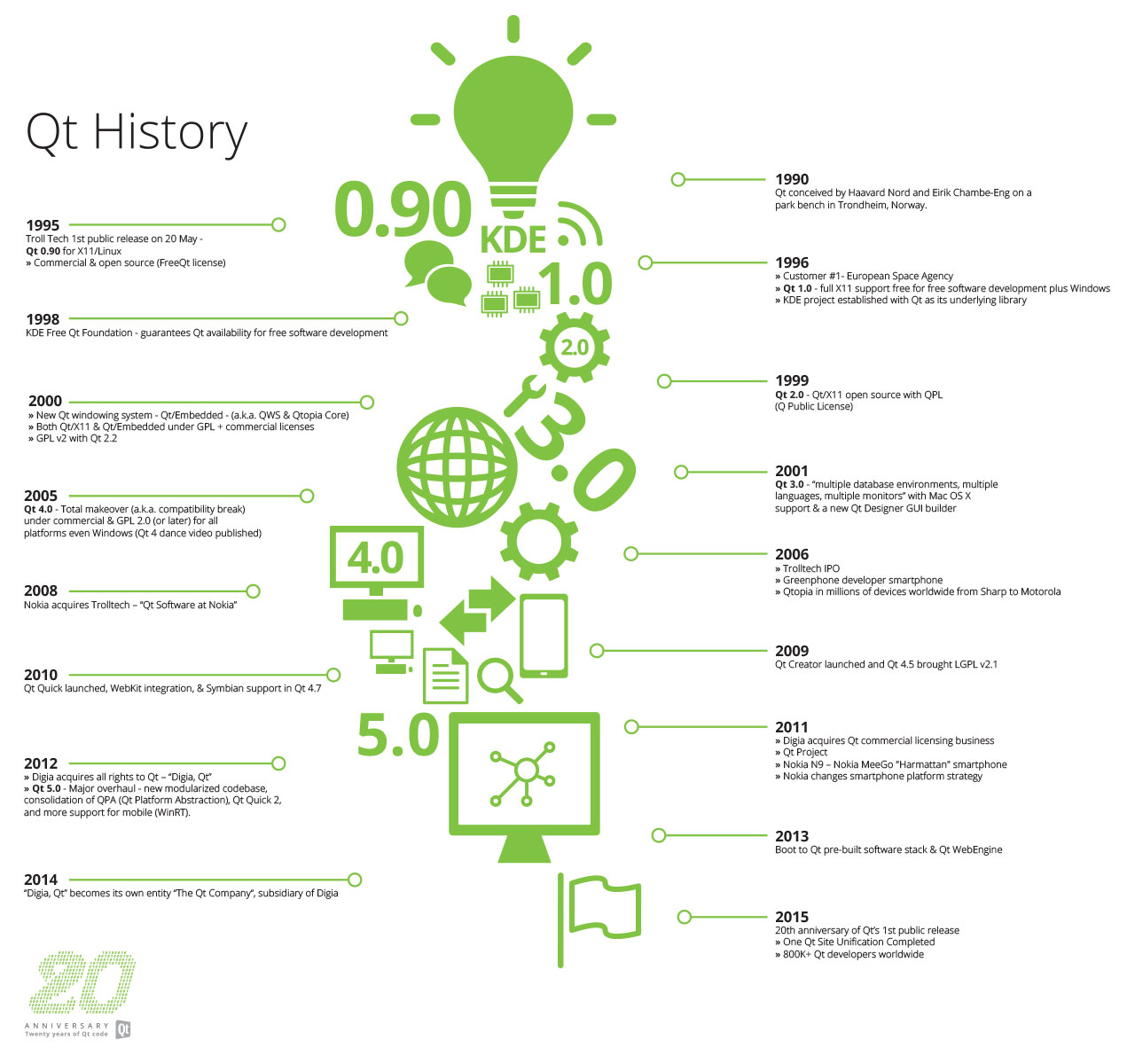