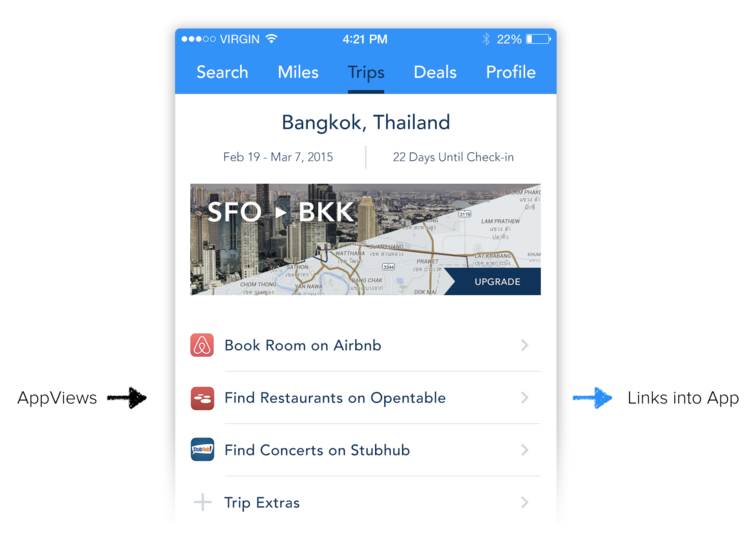 URX sees AppViews as the next step in deep linking—building on existing app-to-app pathways to increase discovery by not only facilitating users from one app to another, but also ensuring they land in the right spot. AppViews sends users signals including page content, location, and current activity to suggest the next action a user should take.

AppViews is built atop the existing URX Search API and knowledge graph, which gives developers a simple way to search crawled app content and forge a deep link without an intricate coding process. Developers can create AppViews through the existing URX dashboard, and can use the initial AppView UI type or leverage SDKs and APIs to code a custom interface returning AppView-recommended images and metadata to the user.

“AppViews are built on top of the URX API,” said URX CEO John Milinovich. “Developers can either quickly integrate the formats we’ve built in a native app or on the web in as little as one line of code. Or they can use the API directly to build a more custom experience. Working directly with the API, developers can access content from over 100 apps—for example, images or descriptions—that they can use to build AppViews.”

The relevant aspect of AppViews for developers is contextual app discovery through Promoted AppViews. Developers have the option to add specific deep links and mobile ads to their apps and get paid for it. According to URX, AppViews is currently live on 250 mobile sites and apps that cumulatively reach more than 100 million monthly active users.

Milinovich explained that the primary reason developers have already integrated AppViews is to bring a new feature to their users, with monetization as added incentive. He said URX is seeing a lot of interest from developers who see AppViews as a way to monetize their app without compromising user experience.

“Our goal really is to offer developers a range of options that best aligns with the experience of their app or site,” said Milinovich. “If you take a look at some of our initial integrations, the Fansided and Blabbermouth integrations are literally a single line of code, while the AppViews in the Sworkit or JCrush really blend into the native experience.”

A closer look at how AppViews is already implementing deep linked recommendations in apps such as Fansided, Lyft, OpenTable, SeatGeek, Spotify and others is available below: