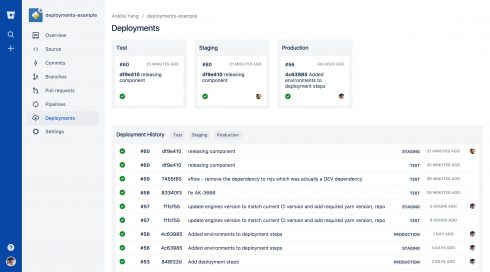 Atlassian has announced the release of Bitbucket Deployments in Bitbucket Cloud, a new deployment solution that manages and tracks code through development to code review, build, test and deployment.

“In each case, teams have to fumble around across different tools to find the information they need. Deployments are going out frequently, but without proper visibility and traceability, the process feels chaotic. This chaos leads to fear. Teams are anxious about making a critical mistake, like releasing a feature that isn’t ready or regressing an important bug fix,” said Claire Maynard, head of marketing for Bitbucket Cloud at Atlassian

Bitbucket Deployments aim to tackle these problems by providing visibility, traceability and control into code. “Developers will be excited that they no longer have to waste time searching across separate tools, through lines of build status to find the information they need. Everything they need is in a deployment dashboard with a full history of past deployments. This visibility and traceability let them move quickly to resolve any issues that might arise,” Maynard said.

Features include: a new deployments dashboards that shows which version of a team’s software is running in each environment as well as a completely history of deployments, a deployment summary that ties in code and deployments, and the ability to preview and promote deployments between environments.