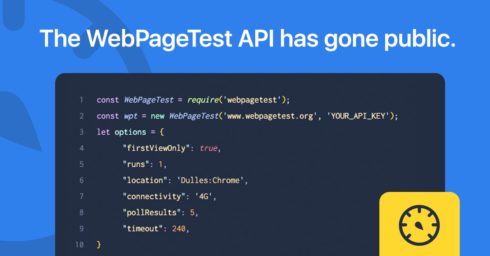 Digital experience monitoring solution provider Catchpoint today announced upgrades to the WebPageTest API that provide deeper performance metrics, immediate test results and integrations with CI/CD tools. The company also announced the API, which had been limited to a small numbers of users, is now widely available.

WebPageTest is a performance measurement tool that can scale to test millions of sites per day, the company wrote on its website.

According to Catchpoint’s announcement, the updated API offers “instant, programmatic access to WebPageTest data and test infrastructure,” including side-by-side video comparison of user experience from around the world.” Catchpoint acquired WebPageTest API in September.

Patrick Meenan, the founder of WebPageTest and now an engineering fellow at Catchpoint, told SD Times in an interview that this launch of the commercial product will turn the API “into a scaled service,” adding, “there’s already a fairly big ecosystem of code that already integrates with WebPageTest.” Developers, he noted, “can use the API to build whatever they want on top of it.”

In the company announcement, Meenan said developers can “leverage the API’s flexibility to optimize site performance and integrate page speed metrics into their development workflow.”

WPT API has a “huge following in the developer space,” he said, while noting that Catchpoint has been more focused on the operational side. “This is kind of the SaaS of performance testing,” Meenan said. “Developers only have to worry about building business logic.”

Developers can use the newly announced GitHub Action for WebPageTest to run performance tests from within their CI/CD tool, enabling continuous delivery of fast Web pages, Meenan said. “At each pull request, [the Web page] stays within the performance targets,” he explained.

Mehdi Daoudi, CEO of Catchpoint, said in the announcement, “Having WebPageTest data integrated with your CI/CD process brings performance into the development conversation, ensuring sites meet speed and usability standards before they’re released and experienced by users in production.”

Also, with Google planning to add Core Web Vitals — performance indicators — into its search ranking algorithm next month, Catchpoint has made sure that WebPageTest can highlight the factors impacting performance and search ranking of Web pages, the company said in the announcement.