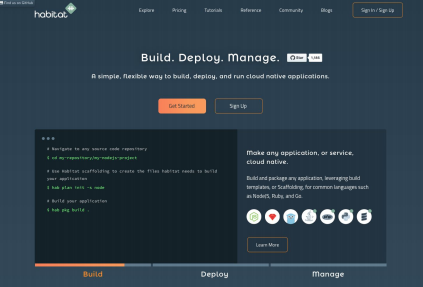 Chef is building on top of its application automation solution with the release of a new SaaS-based service. Habitat was first announced last year as a way to give apps the ability to self-organize and self-configure throughout their lifecycle. Today’s announcement of Habitat Builder adds to that technology by enabling modern application development teams to build, deploy, and manage cloud native applications.

With Habitat, teams can connect to their source code, package and build apps, deploy those apps in any format and runtime, and manage those apps in any cloud native architecture, according to the company. Chef explains it decided to tackle cloud native architectures in this release because of the industry’s move to the cloud, growth of containers, accessibility of containers in the cloud and the recent uptake in microservices.

“While the application portability benefits of containers are widely recognized, lack of consistency in packaging and orchestration across the application lifecycle has, in many cases, limited the success of their deployment at scale, even when using cloud-native architectures,” said Stephen Elliot, program vice president at IDC. “Separating packaging, deployment concerns, and artifacts is one strategy that can empower teams to deliver on business objectives of delivering software at speed, with high quality.”