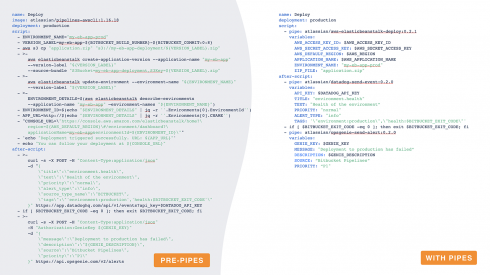 Atlassian wants to make it easier to build automated CI/CD workflows for DevOps initiatives with its release of Bitbucket Pipes today. The newly announced solution is a CI/CD cloud-based tools that enables the configuration of pipelines with code.

“The democratizing nature of DevOps has seen the responsibility of building and managing CI/CD pipelines transition from specialized release engineers to developers. But automating a robust, dependable CI/CD pipeline is tedious work,” Harpreet Singh, head of product for Bitbucket Cloud, wrote in a post. “Developers need to connect to multiple tools to deliver software, and writing pipeline integrations for these services is a manual, error-prone process. There’s research involved to ensure dependencies are accounted for, as well as debugging and maintaining integrations when updates are made. It’s no wonder many teams put automating CI/CD firmly in the ‘too hard’ basket.”

To develop Bitbucket Pipes and provide supported pipes for automating the pipeline, the company worked with companies like Google, Microsoft, AWS and Slack. Pipes are designed simplify the process of dealing with repeated and complicated tasks. In addition, the solution enables developers to create their own pipes. “Whether you’re creating a simple deploy pipeline to a hosting service like AWS, utilizing a multi-cloud deployment strategy, or automating a sophisticated pipeline that involves security scanning, monitoring, and artifact management, Bitbucket Pipes makes it easy to build and automate a CI/CD pipeline that meets your exact needs,” Singh wrote.

According to the company, developers can write their own pipes to do the same action in several steps, run similar tasks in multiple repositories and perform actions that need dependencies. Vendors can write pipes to make their software or service easier to work with within the pipeline. “At its heart, a pipe is a custom Docker image for a container, which contains a script to perform a task. A pipeline calls this pipe, passing it some variables and the magic happens,” according to the company’s website.

Atlassian explained the supported pipes will be updated and managed by their authors, so developers don’t have to worry about constantly updating and re-configuring them. There will be pipes available for new users as well as the ability for experienced users to reuse pipes and discover new ways they can automate their pipelines.