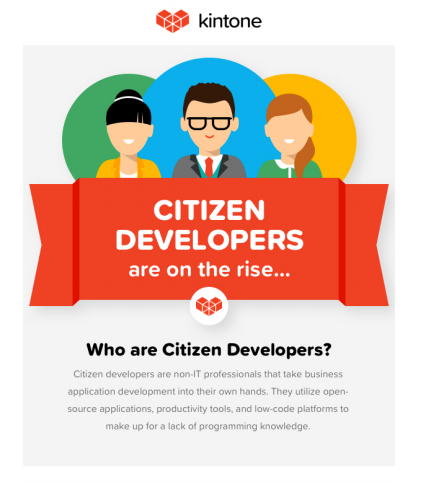 A newly released report from Kintone found that no-code solutions and citizen developers are becoming more prevalent in the software development industry, with 76 percent of respondents reporting that at least a portion of their apps are developed outside of IT. Twenty percent of executives also reported a majority of their apps are completely developed outside of IT.

“The tremendous increase in the features, sophistication and agility of no-code and low-code development application platforms, combined with the significant advances in ease of use, integration and deployment by non-coders, has empowered citizen developers like never before,” said Dave Landa, CEO of Kintone.

The report, The Rise of the Citizen Developer: 2017 Low-Code Adoption Survey, was conducted with Unisphere Research and based on 324 qualified responses.

“Empowered citizen developers can go to work on organizations’ long backlog of custom application needs while constantly upgrading systems and solutions to keep organizations advancing at the speed of business, building for scale, and innovating rapidly,” Landa said. “They can help IT departments resolve long custom application request backlogs and keep a business’s systems and processes up to date and being managed at optimal efficiency.”

“As the findings of the report and the rapidly growing low-code industry shows, the no-code / low-code revolution is fully upon us and only picking up speed,” said Landa.