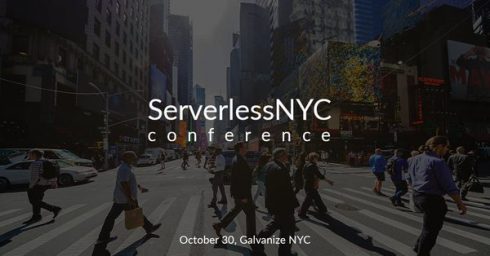 While the official Serverless NYC conference’s T-shirt said “I have seen the future! Serverless is fast, free and everywhere,” speakers at the event say that couldn’t be further from the truth. Continuous data platform provider Iguazio hosted yesterday’s conference to give attendees a reality check on what is going on in the serverless world, and the reality is that it may not be all that it is cracked up to be.

According to Kelsey Hightower, developer advocate at Google, the future is not serverless. The reason why he made that bold statement is because we can use serverless right now. The problem is that he thinks serverless comes with too many promises. “It is a computing platform, but doesn’t necessarily solve general computing needs,” he said. “There are all these computing platforms each promising to do better than the previous.”

RELATED CONTENT: Rethinking the way you build software with serverless

He explained, too many times a new approach comes out and people jump on it without remembering the approaches that came before. “Sometimes you can actually learn from previous implementations to see where they fall short,” he said. “There are limits to the way we deal with these machines.”

In fact, with serverless, when Hightower asked the crowd how many people have built end-to-end serverless applications from scratch, only a handful of people raised their hands. Hightower took attendees through an example of building his own service from scratch, and what he learned is that it is not easy to develop a completely serverless solution. You still need to cover your bases, have granular insight, and it still requires a lot of code. For the simple function he developed, he was still responsible for 365 lines of code. Hightower does believe serverless computing is an improvement over the way we do things, and works very well at handing certain things, but users need to be pragmatic about what it is good at and what it is not good at.

“It is not going to solve all your problems,” Hightower said. “If we keep overpromising, then people will be turned off from the platform and retreat.”

Other speakers at the conference echoed similar concerns. Confluent’s product manager Gwen Shapira stated there were still a lot of things she wishes we could do with serverless. Shapira found serverless does not work well with things like data handling because data requires a state and serverless is often more well suited for stateless applications. For instance, having dynamic rules, event enrichment, joining multiple events and performing aggregation requires state, she explained. “As long as it is stateless, [serverless] is very easy to scale in and out, but what happens when you have data?” she asked.

Orit Nissan-Messing, chief architect and co-founder of Iguazio, found that while a lot of businesses are trying to move toward artificial intelligence to gain immediate insights, make smarter decisions and have cloud agility, serverless doesn’t blend well in this area. Nissan-Messing explained when you combine serverless with AI you get slow performance, lack of concurrency, limited number of event sources, and complex functions and dependencies to manage. However, the company did announce its latest version of Nuclio, a serverless solution for real-time and data-driven applications, to address this.

Ben Kehoe, cloud robotics research scientist at iRobot, thinks the really issue standing in serverless’ way is our mindset. “Serverless is still the future because the mindset shift is the thing we haven’t gotten to,” he said. “You shouldn’t have to solve technology problems before you can solve your business problems.”

Serverless is about focus and when attention is already limited, focus is a tradeoff. In order to get to a serverless mindset, Kehoe stated you need to let go of a little bit of control and trust that the providers you are using to help operate your business can handle things.

“Severless in some way is minimalism,” he said. “Don’t take on things you don’t have to. Only take the things under control that you need to.”