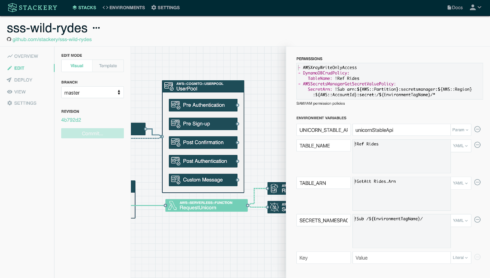 Stackery’s SaaS platform makes it possible for any business designing, developing, and delivering modern applications to enhance productivity while ensuring that their workloads are compliant and well-architected from end-to-end, according to the company.

The platform helps customers define and protect how applications are deployed to testing, staging, and production environments, for promoting applications to environments via Amazon Web Services (AWS) CodeBuild, and for tracing and auditing.

Automated verification was built in for both the CI and CD portions of the pipeline to provide an automated workflow in which users don’t have to think about best practices. Another new capability that was built in is an integrated GitOps workflow, a modern software development workflow.

“This is used for system testing, integration testing, unit testing, as well as humans can go in and do usability testing as well,” Zonca said.

Upon successful completion of these tests, the deployment is automated through the final deployment tiers: staging and production. It also offers the ability to choose between either automation up to the final stage, or automation all the way throughout the process.

Stackery gives developers access to unique code-to-architecture visualizations and unlocks more than 20 serverless services for developers and DevOps teams. This year, Stackery has enhanced its offering with native support for provisioned concurrency and for AWS HTTP APIs service, enabling its customers to cut cloud costs by up to 70% and drive a 60x faster release cycle, the company stated.

“We see the definition of serverless broadening and more developers will have the power to build modern applications with more and more resources without worrying about the underlying complexity of scaling everything,” Zonca said.

“Amazon tooling didn’t do it for us because it didn’t have a good cross-account view. One of the things that turns out is the best way to run your organization when you’re using serverless or using serverless services, is to have every developer have his or her own account, every environment has its own Amazon account, so there’s this massive benefit in running them all identically. Amazon tends to only think within one account at a time,” said Joseph Emison, the cofounder and CTO of Branch Insurance. “And so Stackery has this great view that’s very cross-account and is built around being able to think about how am I replicating this exact same set of things in all these different accounts.”

Secondarily, Emison added that Stackery gave extensions and additional benefits on the AWS Serverless Application Model and CloudFormation functionality. These are Amazon’s tools to run infrastructure as code that enables users to define their infrastructure in their code base and then instantiate it instantiated.

“They lack a number of functionalities and using them on their own the way Amazon has them set up is much more painful than through Stackery,” Emison said.

The recent additions to the Stackery platform, according to the company’s announcement, are as follows: