Randy Farmer was the other big brain behind the game, and he said that of the 64KB of memory in the C64, 32KB were used exclusively for the character animations and movements so as not to create a flicker in the display. Thus, this online graphical environment kept all of its visuals in 32KB, and all of its core gameplay and networking code in another 32KB.

While the Habitat client ran on a Commodore 64, the server ran on Stratus VOS. I’ll wait here while you read about it in Wikipedia.

Frankly, the folks reading this site right now are some of the only people in existence who even have a better than 20% chance of ever hearing of VOS. I consider myself something of an expert on computing history from around 1980 forward, and I’d never heard of this OS, nor of this hardware architecture before. And yet, JP Morgan Chase is still hiring VOS people!

Finding the machine
As it turns out, Stratus Technologies is still around. Today they sell IBM z series, which makes perfect sense given the company’s roots in mainframe hardware. But back in 1986, if you wanted an always-on piece of server hardware, there weren’t many choices. Stratus was probably the best option, though companies like Tandem and Sun were offering similar solutions: super fault tolerance in the server hardware.

When we began work on this project, I started snooping around computer recycling centers and with computer collectors to try and find a Stratus machine. Before long, I stumbled upon Paul Green, who has been with Stratus since the start. He very graciously offered to build us a VOS machine for the project, and to ship it out to California for us, free of charge. 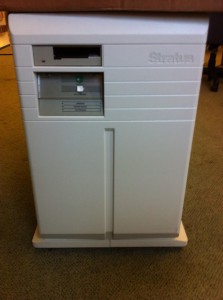 The image above is the server, a Stratus Nimbus. It contains 64MB of RAM, two 16Mhz 68030 processors, and we were very lucky that Paul was able to find an Ethernet card for it! Of course that card is RS-232, but he sent an adapter for RJ45. This past weekend, we fired it up and gave it an IP address. Then we immediately shut it down, fearful that someone would log in via telnet.

Of course, that was ludicrous. Even if someone did see our login and password over clear text (no SSH back then), what could someone do with this beast? The VOS is not exactly a well-known OS. The directories are separated by angle brackets, and the actual command prompt doesn’t take any Unix commands I’m familiar with.

The PL/I problem
It is a beautiful machine, however. It’s like a classic car: quirky, unique, and entirely impossible to repair if something goes wrong. Why? Because this is probably the last functional Nimbus in the world. And it’s not even fully functional. Today, if you sent someone a computer with bad RAM, you’d get an earful. The Nimbus, sadly, only has one good board of RAM, and is thus left with only 32MB of RAM instead of the 64MB that are actually there.