Are you stuck in the new DevOps matrix from hell? 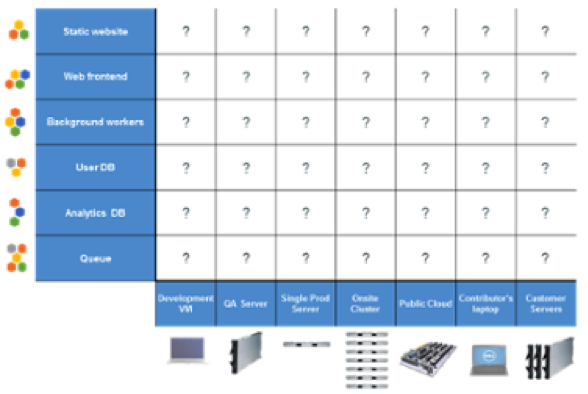 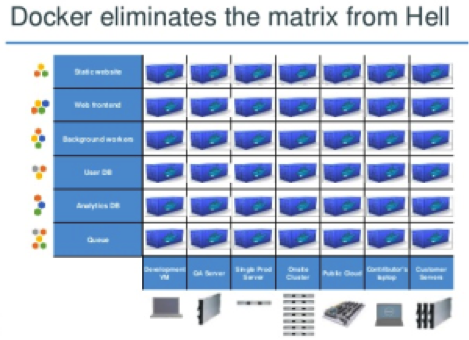 The original matrix from hell: applications were tightly coupled with underlying hardware

Docker solved for the matrix from hell by decoupling the application from the underlying operating system and hardware. It did this by packaging all dependencies inside Docker containers, including the OS. This makes Docker containers “portable,” i.e. they can run on any cloud or machine without the dreaded “it works on this machine” problems. This is the single biggest reason Docker is considered the hottest new technology of the last decade.

With DevOps principles gaining center stage over the last few years, Ops teams have started automating their tasks like provisioning infrastructure, managing config, triggering production deployments, etc. IT automation tools like Ansible and Terraform help tremendously with these use cases since they allow you to represent your infrastructure-as-code, which can be versioned and committed to source control. Most of these tools are configured with a YAML or JSON based language which describes the activity you’re trying to achieve.

The new matrix from hell
Let’s consider a simple scenario. You have a three-tier application with API, middleware, and web layers, and three environments: test, staging and production. You’re using a container service such as Kubernetes, though this example is true of all similar platforms like Amazon ECS, Docker Swarm and Google Container Engine (GKE). Here is how your config looks:

Notice the problem? The configuration of the app changes in each environment. You therefore need a config file that is specific to application/service/microservice and the environment!

Your first instinct is probably to point out that you can, in fact, templatize the YAML scripts. For example, the following config would ensure that the same YAML will work across all environments and apps: 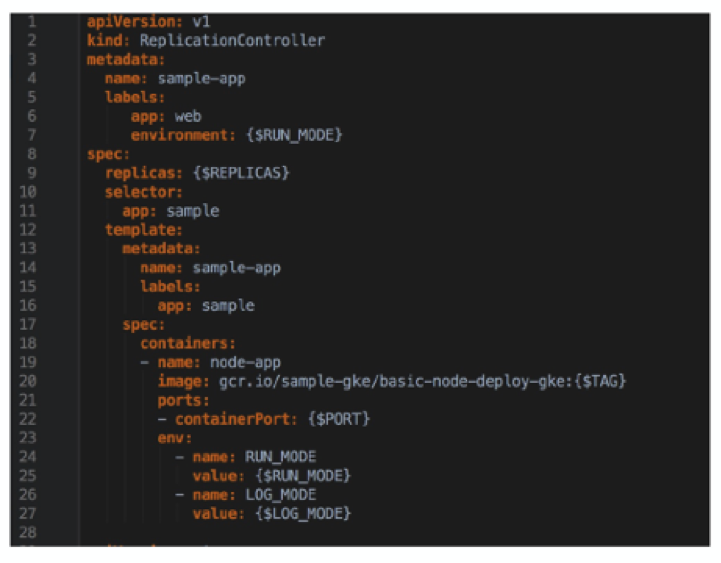 In theory, this is correct. A string replace will replace all values depending on the application-environment combination, and you should be good to go.

However, this approach also has a few issues:

Faced with these challenges, most teams don’t bother templatizing and take the path of least resistance – creating deployment config files that are app-env specific. And this leads to… a DevOps matrix from hell! Can you imagine the matrix below for 50+ microservices?

The DevOps matrix from hell: automation scripts are tightly coupled with app/env combination

Avoiding the DevOps matrix from hell
The fundamental issue behind this new matrix from hell is that application configuration is currently being treated as a design-time decision with static deployment config files. You can only change this by having the ability to dynamically generate the Deployment config, depending on the requirements for an environment. This configuration consists of two parts:

To generate the deployment config dynamically at runtime, your automation platform needs to be aware of the environment the application is being deployed to, as well as knowledge of the package version that needs to be deployed.

The image above shows a conceptual workflow of how you can dynamically generate your Deployment config:

A DevOps assembly line platform can help avoid config sprawl and the DevOps matrix from hell by configuring the workflow above fairly easily, while also giving you repeatability and audit trails. You can also go the DIY route with Jenkins/Ansible combination and use S3 for storage of state, but that would require extensive scripting and handling state and versions yourself. Whatever path you choose to take, it is better to have a process and workflow in place as soon as possible, to avoid building technical debt as you adopt microservices or build smaller applications.

Manisha Sahasrabudhe is co-founder and vice president of product management at Shippable.

View all posts by Manisha Sahasrabudhe