At this week’s Game Developers Conference in San Francisco, the contrasts against the world of enterprise software were apparent. Instead of Continuous Integration or distributed development in the cloud, discussions focused more on topics such as monetization through ads, VR gear and diversity.

The games industry paints an interesting contrast with the business world of software. Both industries are tremendously deadline-focused, with a lot of money riding on the line for project managers in charge of multi-million-dollar projects involving hundreds of workers and dozens of programmers. Both areas of software development are increasingly focused on mobile and on the potential of the Internet of Things.

Game developers seem to forego source control and test tools and code review, and most any enterprise manager would call the state of game development positively un-agile. And yet, despite this looser approach (or perhaps because of it), the single most precious enterprise buzzword is here in abundance: innovation. 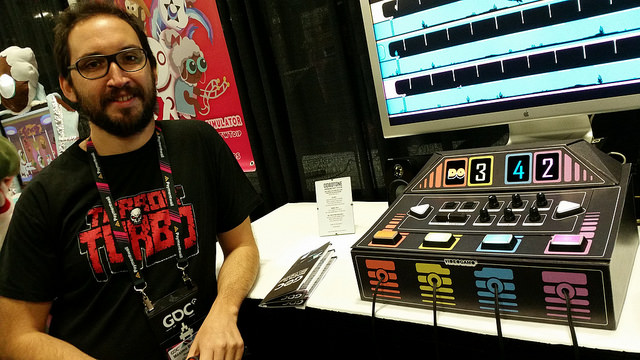 Maximo Balestrini (pictured) and Hernan Saez (not pictured) created Dobotone, a four-player game played with only two buttons each. A series of minigames are played and modified by the knobs on the console: difficulty, gravity, zoom and other gameplay elements can be adjusted.

Take, for example, the Alt.Ctrl.GDC pavilion at the conference. This area specifically showcased games built around strange controllers. When one thinks of video games, the image of an otherworldly hockey puck riddled with buttons and thumbsticks may come to mind.

Here, however, a controller can be something as unorthodox as a pillow you squeeze to make a character move. Or it could be a 1930s era telephone switchboard. Or, as was the case with Crank Tank, the controller could be a large wooden crank you spin with all your might to turn the beast. Another game attempted to recreate the experience of reading a book after bedtime, complete with blanket over the head. 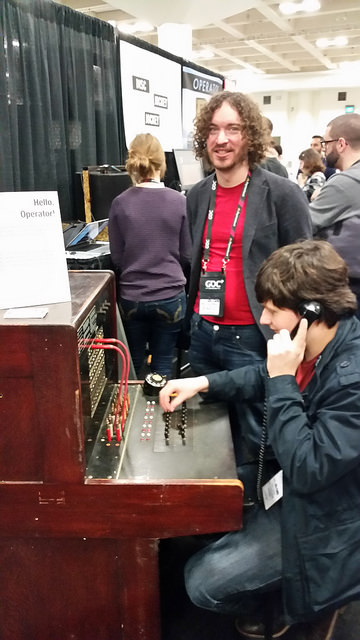 Mike Lazer-Walker (standing) created Hello, Operator at the Playful Systems Group at MIT. Players must emulate the actions of Ma Bell’s telephone switchboard operators by plugging wires into their proper connections upon request.

Then there’s the Independent Games Festival, the nominees for which were almost entirely devoid of space aliens, shotguns and mushroom-eating plumbers. Instead, games like That Dragon, Cancer, tackled the subject matter of a set of parents coping with the knowledge that their 12-month-old has been diagnosed with terminal cancer.

Or games like Sunset by Tale of Tales, which chronicles the rise and fall of a Latin American dictator through the eyes of his cleaning lady (you). Then there’s Her Story, which features dozens of police interview clips with the same woman, from different times. By searching the video database for keywords mentioned in her interviews, the player finds more videos, and thus, unwinds the twisted tale behind the central character’s frightening past. 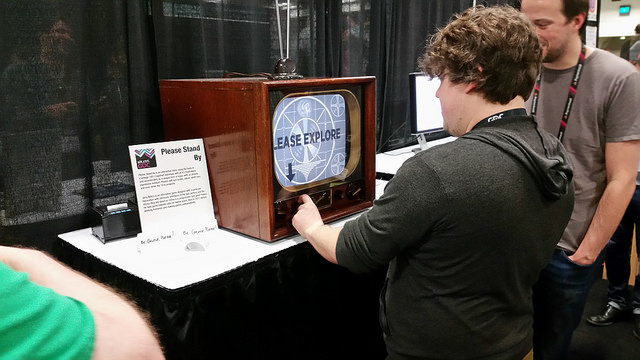 Please Stand By had players fiddling with the knobs of an ancient television, and even slapping it on its sides, as the images on the screen rapidly changed from test patterns to static to instructions. It was created by Jeremy Belich and required a gentle touch, despite the necessary slaps to the sides.

It’s hard not to find innovation at GDC. From VR headsets to VR suits, to VR fans (yes, really) and VR footrests, there were plenty of new products to go around. But the real innovations here were in software and the unique way game developers present that software to their users.