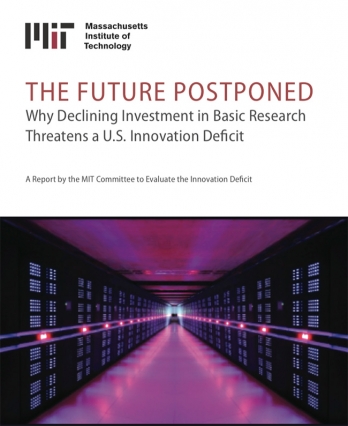 Innovation in the United States will suffer if there is no surge in basic research investments, according to a report recently published by a committee at the Massachusetts Institute of Technology. The report, “The Future Postponed: Why Declining Investment in Basic Research Threatens a U.S. Innovation Deficit,” looks at how declining research investments will impact the future of scientific breakthroughs in the U.S.

“The U.S. is falling behind other countries in the fraction of GDP spent on R&D, and the entire U.S. scientific community is alarmed by how difficult it is for young scientists to do their research,” said Marc Kastner, an MIT professor who led the preparation of the report. “Our innovation economy is the result of investments decades ago, and if we do not make similar investments now, we cannot expect a strong innovation economy in the future.”

(Related: The 10 breakthrough technologies being worked on today)

The problem is that basic research gets overlooked because there isn’t an immediate payoff, according to the report. Kastner added that the dwindling federal discretionary budget also has a huge impact.

According to the report, the percentage of the U.S. federal budget that goes to basic research dropped to just less than 4% in 2015, compared to about 10% in 1968.

One area the report said is in dire need for investment is cybersecurity. If there were proper investments in cybersecurity, newer and better computer systems could be built, multi-factor authentication systems for better protection could be created, and there would be little worry about hacks or developers making mistakes, according to the report.

“One fundamental cause of cyber insecurity is core weaknesses in the architecture of most current computer systems that are, in effect, a historical legacy,” the MIT committee wrote in the report. “Several research activities would make such a transition to a cybersecure world much easier and more feasible.”

Robotics is another area the report highlighted as having limited growth in the U.S. due to a lack of investment. According to the report, robotics could help eliminate many burdensome human tasks, but requires a large investment to develop the advanced technology skills needed to make the technology conceivable.

“Unfortunately, while the U.S. is a leading country in the use of industrial robots, no U.S. company is a market leader in designing and manufacturing them,” the report stated. “The U.S. is already relying on other countries to provide industrial robots.”

In addition, the report detailed how defense technology, photonics, biology, batteries, Alzheimer’s research, space exploration, and energy will be affected without proper funding.

“We are under-investing in almost all areas of research, but the most basic work, where it is hard to predict what technology will emerge, is suffering most, because when budgets are tight, decision-makers tend to be more risk-averse,” said Kastner.

So how can we ensure that U.S. innovation isn’t compromised? The only way is for the government to realize the potential benefits from investing in basic research and increase funding levels, according to Kastner.