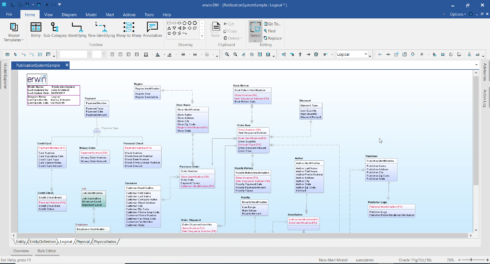 Data governance solution provider erwin is releasing a new version of its data modeling solution. According to the company, the erwin Data Modeler is designed to help users design, deploy and understand high-quality data sources.

The new version features a new UI that makes it easier to customize the modeling canvas and access features and functionality.

RELATED CONTENT:
2020: The year of integration
DataOps is more than just DevOps for data

“From our standpoint, we needed to do more around the technology to make it even easier for customers to be able to use the technology as well as be able to leverage that rich metadata that’s in those data models,” said Adam Famularo, CEO of erwin, in an interview with SD Times. “The development team has spent over a year working with some of our top customers around the user interface and how they work within the product on a daily basis — wanting to make it cleaner, easier, more streamlined while also building all the integrations into our data intelligence suite so you can be able to harvest the rich metadata that you’re building in these graphical user interface and be able to harvest it into our metadata manager technology.”

The Data Modeler integrates with the company’s Data Intelligence Suite to automate the harvesting of the metadata for integration into the data catalog as well as to provide better analytics, governance and data intelligence.

Other features of the new release include support for and model integration from major databases such as Amazon RedShift, latest DB2 releases, and the latest MS SQL Server releases. Additionally, modeling task automation capabilities have been added to save time, reduce errors and increase work product quality and speed. The capabilities include a new scheduler, new quick compare templates, a new ODBC query tool, and ability to customize and automate super-type/sub-type relationships.

Famularo explained that this is one of many updates the company plans in Q1.

“Today’s data modeling is not your father’s data modeling,” said Famularo. “While it’s always been the best way to understand complex data sources and automate design standards and integrity rules, the role of data modeling continues to expand as the fulcrum of collaboration between data generators, stewards and consumers. That’s because it’s the best way to visualize metadata, and metadata is now the heart of enterprise data management, as well as data governance and intelligence efforts.”