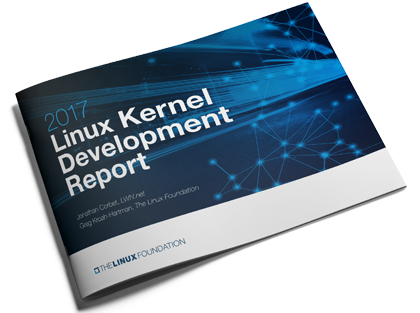 The Linux Foundation is releasing its 2017 Linux Kernel Development Report to examine progress that has been made to the Linux kernel as well as who is using and contributing to it. This year’s report details Linux kernel 4.13, with a focus on 4.8 to 4.13.

The Linux kernel forms the core of the Linux operating system. The kernel is used to manage hardware, run user programs and maintain security.  “The kernel is a relatively small part of the software on a full Linux system (many other large components come from the GNU project, the GNOME and KDE desktop projects, the X.org project, and many other sources), but it is the core which determines how well the system will work and is the piece which is truly unique to Linux,” the report states.

Since 2005, the kernel has had roughly 15,600 developers from more than 1,400 companies contributing to it. Since last year’s report, more than 4,300 developers from over 500 companies have contributed to the kernel; and about 1,670 developers contributed for the first time. “The Linux kernel is not a young project; it just celebrated its 26th anniversary. The software world is one of constant change, and today’s hot system often doesn’t last past tomorrow, but Linux, after more than a quarter of a century, is going stronger than ever,” according to the report.

Over the past year, the kernel has been updated through merged changesets, new drivers, hardening and testing.

The report also details what developers want to see the kernel community work on, such as focusing on scaling the community, attracting more young talent, standardizing definitions, and improved code cleanup and consolidation.

The top 10 organizations sponsoring Linux kernel development are: Intel, Red Hat, Linaro, IBM, Samsung, SUSE, Google, AMD, Renesas and Mellanox. “I contribute to the Linux kernel because it is fun. While it is difficult for a single company to employ all the smartest people, I can reach out to the kernel development mailing list to debate and collaborate with world class talent. The debates inevitably make progress because we are always unified by the common principle of doing what is best for the long term health of the project. I grow and learn something new almost every time I make a contribution, Dan Williams, software engineer at Intel, said in the report.

While the kernel has seen a lot of success and progress over the last 26 years, the report states a few lessons that have been learned along the way. It includes: the importance of short release cycles, tools matter, corporate participation in the process is crucial, there shouldn’t be any internal boundaries within the project and the strong consensus-oriented model of the kernel is important.

“The incredible rates of contribution and participation in the Linux kernel demonstrate the continued strength and scalability of the kernel community,” said Jim Zemlin, executive director of The Linux Foundation. “This report provides important information that helps show how incredibly effective the collaborative development model can be for one of the most essential software projects in history.”