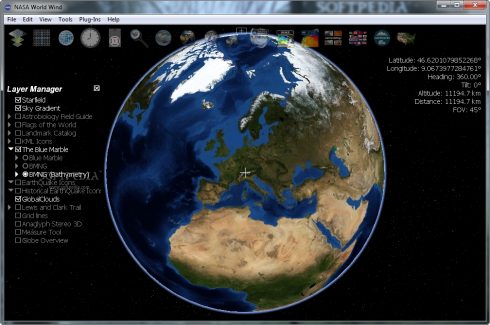 NASA is teaming up with npm to create software projects that help share critical information about the health of our planet. One project in particular is designed to help developers access NASA data and create interactive visualizations of 3D globe, map and geographical information.

WorldWind is a free and open-source virtual globe SDK currently in use by many applications for satellite imagery visualization, urban management, vehicle tracking, and more. The library and package is developed by NASA and distributed by npm. NASA first released WorldWind in 2003, and made it available to the open source community a year later.  It runs on all major operating systems on desktop and mobile devices.

“WorldWind is different from a 3D globe like Google Earth because it is not an application. Instead, it is an SDK (software development kit) that software engineers can use to build their own applications. WorldWind provides a geographic rendering engine for powering a wide range of projects, from satellite tracking systems to flight simulators,” according to the WorldWind website. “With WorldWind taking care of the hard work of visualizing geographic data (generating terrain from elevation models, selecting and displaying images from imagery servers, etc), software engineers are free to focus on the solving the problems specific to their own domains and quickly building whatever geospatial applications they choose.”

Web WorldWind 0.9.0 was recently released. “With our most recent release, we now provide WorldWind as an npm package for one of its integration methods,” said Patrick Hogan, NASA WorldWind project manager. “The Web WorldWind SDK easily integrates with other npm-based tools. npm.js has greatly enabled this ESA-NASA open source virtual globe platform to reach a much wider global audience of developers.”

“NASA has been developing open source virtual globe technology since 2002. Before Google Earth there was NASA WorldWind,” said Hogan. “And we have been developing a JavaScript version of our 3D globe for the web going on five years now. This technology is used extensively throughout the U.S. Government and the international community. Even the European Space Agency (ESA) has standardized on it. ESA is also working closely with NASA to further advance the world’s most accurate geospatial platform.”