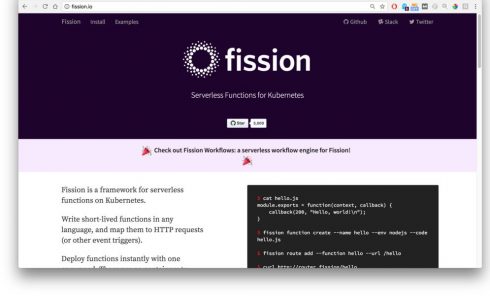 Built by Platform 9 and other contributors in the Kubernetes community last year, Fission is a open-source Function as a Service (FaaS) serverless framework focused on developer productivity and high performance. The framework enables developers to write short-lived functions in any language and map them to triggers such as message queues, timers, HTTP requests, or other event triggers. It can be extended to various languages including Python, NodeJS, Go, C#, and PHP.

According to the company, Fission is extensible to any language and it is an open sources under the Apache License. It was built in order to reduce the time and effort developers spend on developing applications. The functions in Fission are deployed with one command, no containers to build and no Docker registries to manage.

“The operational focus of a developer using Fission is only on “the code”. The complex steps involved in packaging, deploying and managing applications are automated by Fission while being entirely native to Kubernetes,” according to the project’s website.

Recently, Platform9 announced the release of Platform9 v3.2 with two new Fission capabilities: Fission declarative specifications and Function auto-scaling. These new capabilities are designed to allow developers to speed up their deployment of serverless computing.

“At Platform9, we’re seeing more of our customers adopt and leverage Fission’s capabilities across a number of use cases, including reducing application and API development time, managing complex functions, and integrating complex systems,” said Jeremy Brooks, director of customer success at Platform9, in a company blog post.

Fission declarative specifications allow developers to define a function once and then deploy it anywhere, according to the company. This aims to reduce the time it takes to manage deployment functions. Also, it limits the difficulties managing a function base of serverless code across multiple endpoints, Brooks explained.

Function auto-scaling allows a function to scale horizontally and ignore the excess load. This will ensure that responses are handled on time, requests will not be lost, and increase productivity. For example, if a developer has to generate a lot of capabilities from their function, it will automatically scale and take care of the excess load.