Microsoft has announced preview 1 of  ASP.NET Core 2.1.0. The next release will introduce Identity UI as a library. According to the company, this will reduce the amount of code that users have to deal with. Microsoft also plans to update the identity scaffolder in order to provide a UI for selecting pages.

Also expected in ASP.NET Core 2.1 is the ability to ship Razor UI in reusable class libraries.

“Having all this identity code in your app gives you a lot of flexibility to update and change it as you please, but also imposes a lot of responsibility. It’s a lot of security sensitive code to understand and maintain. Also if there is an issue with the code, it can’t be easily patched,” the team wrote in a post. 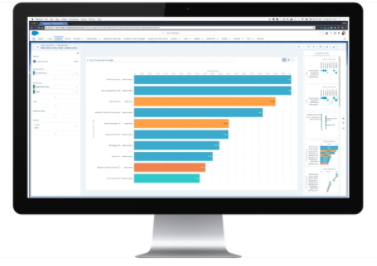 Salesforce has announced expanded capabilities to the Einstein Analytics platform. Conversational Queries aims to help simplify how business users interact with their data. The capability enables business users to explore and find answers from their data by just asking a question.

Other features include suggestions to the best way to visualize an answer, a visual history of questions asked, and the ability to take action and share amongst the team.

“Conversational Queries is going to be a huge game-changer in the AI and BI space,” said Rick Nania, director of CRM operations at Active International, a beta user of the new functionality. “Having the ability to ask questions and gain key insights into our data just by typing or speaking a few words is amazing. I was impressed with the ability to get suggestions just by typing in a few letters and seeing other possible questions to ask- no data scientists required.”

Amazon acquires GamesSparks
Amazon has announced the acquisition of GameSparks. GameSparks a platform designed to develop games at scale. The company plans to offer a variety of cloud services to game developers, which would allow Amazon to run live game operations.

“GameSparks has long shared Amazon’s passion for helping developers create amazing gaming experiences, so it’s a natural fit,” the company wrote in a blog post. “Being part of Amazon means we’ll continue to grow the service, as well as explore new ways to unlock the power of Amazon to help you build, operate, and monetize your games.”

Webpack 4 released
The webpack team has announced that webpack 4 is now available. Webpack is an open-source JavaScript module bundler. The new updates address identifying blocking bugs in loaders and plugins, and  speeds up development for developers with build optimizations.

This release is codenamed Legato, which means “to play each note in sequence without gapes.”

“Webpack bundles our entire front-end app together, without gaps (JS, CSS & more). So we believe that “legato” is a good fit for webpack,” the team wrote.

Snyk round of funding
Snyk has announced that the company has closed $7 million Series A round of funding that was led by Boldstart Ventures and Canaan Partners. This will allow the company to deploy additional offerings to improve the secure usage of open source for developers.

“Security controls must adapt to the new pace open source and cloud dictate. Failing to do so is what led to the recent breaches at Equifax, Uber, and the Tesla cloud breach.  We’re relying on strangers’ code to run the most sensitive aspect of our business, and do so at neck-breaking speed,” said Guy Podjarny, CEO and co-founder of Snyk. “Traditional security solutions simply cannot keep up,” he added.