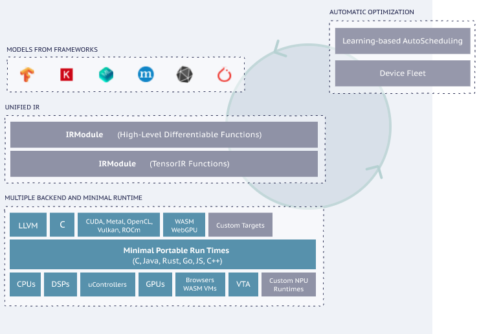 Apache TVM started as a research project at Washington University, and entered the Apache Incubator in March 2019.

“It is amazing to see how the Apache TVM community members come together and collaborate under The Apache Way,” said Tianqi Chen, vice president of Apache TVM. “Together, we are building a solution that allows machine learning engineers to optimize and run computations efficiently on any hardware backend.”

Apache TVM aims to make it easier for developers to work with machine learning computations and applications, and run them on any hardware modules, platforms and systems. Top features include high performance with minimal runtimes; ability to run on backends, CPUs, GPUs, browsers, microcontrollers, FPGAs, and ASICs; support for deep learning compilation models in Keras, Apache MXNet (incubating), PyTorch, Tensorflow, CoreML, and DarkNet; and support for C++, Rust, Java and Python.