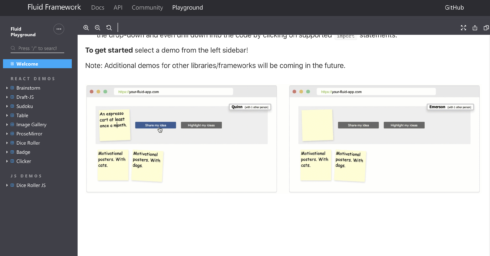 “Fluid Framework is built from the ground up for very low latency collaboration and synchronization. Developers using Fluid’s distributed data structures can build powerful collaborative applications using familiar programming patterns. When a user makes a change in their browser – adding a comment, editing content, pressing a button – all other users will see that change nearly instantaneously,” the Microsoft 365 team wrote in a post.

The project currently provides examples, a sample application, and a walkthrough of the framework. The team is currently working on the ability to embed elements anywhere content is edited such as Microsoft Teams and Outlook, and will be rolling out more scenarios soon. In addition, they will preview app developer experiences and how applications can be plugged into the framework.

“What if you didn’t have to invest in server code at all? Imagine if you could use a general purpose server which was designed to be light-weight and low cost. Imagine if all your development was focused on the client experience and data sync was handled for you. That is the promise of Fluid,” the team wrote in the framework’s documentation.