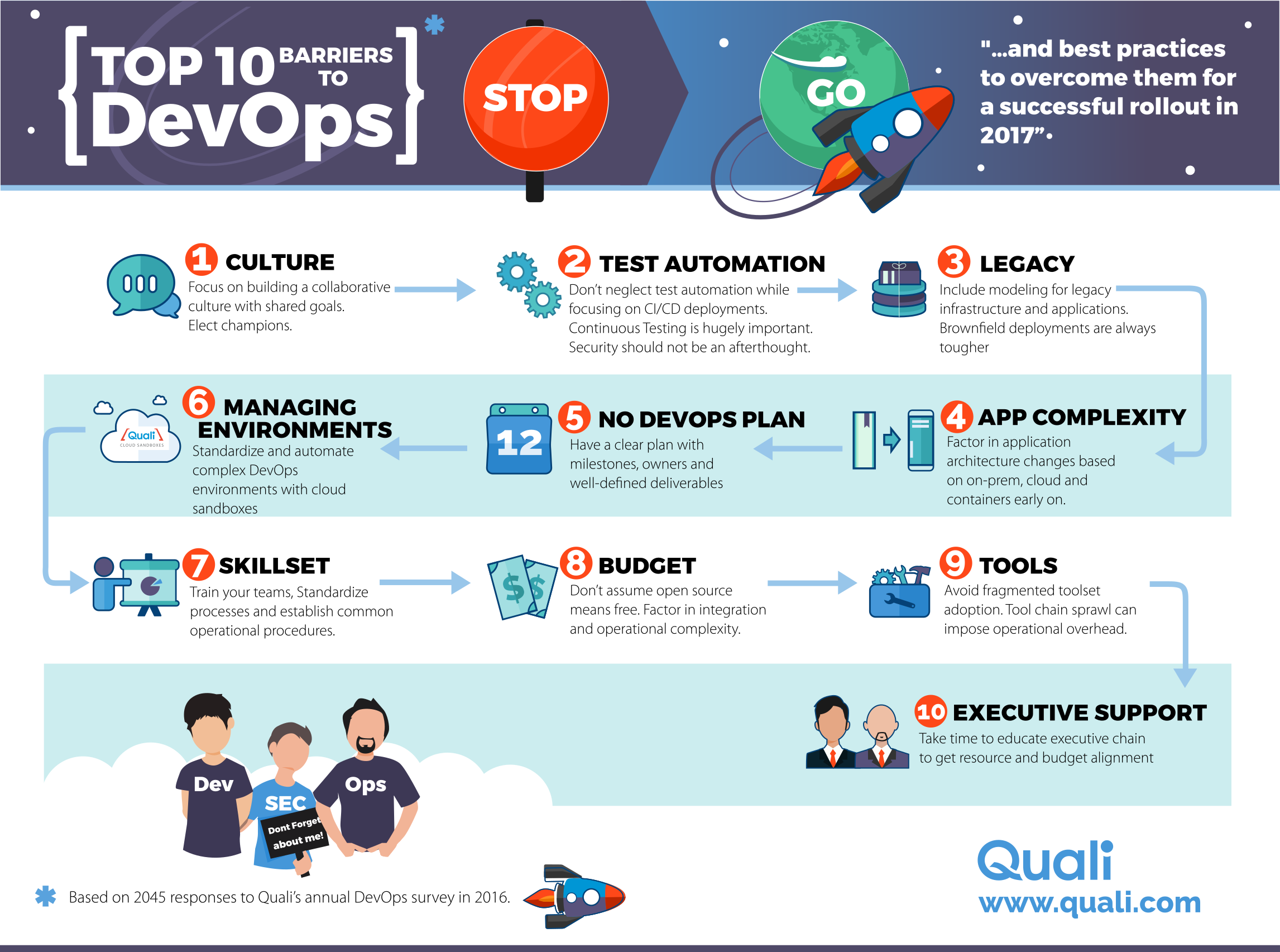 Despite the number of IT organizations adopting DevOps, there are still some major barriers standing in the way, like the lack of self-service infrastructure and the fragmentation of developer toolsets.

A recent DevOps survey from Quali, a cloud sandbox software company for DevOps automation, highlights some of these ongoing IT challenges in the cloud and in DevOps adoption. This feedback comes from more than 2,000 IT executives from tech industry events in 2016, including Cisco Live, VMWorld, Jenkins World, and several others.

A major finding from the survey is that 54% of respondents indicated they have no access to self-service infrastructure, which means more than half of respondents take a ticket-based approach to infrastructure delivery. This impacts both productivity and time to market, according to DevOps expert from Quali, Shashi Kiran.

“Today you see a lot of emphasis on speed, agility and the need to go fast, all of which are facilitated by cloud and as-a-service models,” said Kiran. “We had very strong feedback that not having self-service access to infrastructure was a big bottleneck in making that happen.”

According to Kiran, this means there is still a lot of complex, legacy infrastructure in place, which isn’t necessarily cloud-enabled and it is not possible to get access to infrastructure to even work on a deployment of applications quickly.

Another insight that highlights problems with DevOps adoption (which Kiran said doesn’t come as a surprise) is that there are a lot of developers using their favorite, but often not well-integrated, DevOps toolsets.

“The fact that there are a number of tools for DevOps is a good thing but, the flip-side is there are too many of them and they are too fragmented,” said Kiran.

What tends to be the case in IT organizations, according to Kiran, is a DevOps engineer will use one particular tool they are comfortable with, and then when they finish that project with that toolset, they move onto a different project. Then another developer will come in and use their own tool to complete another project or manage an ongoing project.

Over time, this process adds complexity which really shouldn’t be the case in a DevOps environment, said Kiran. In fact, the survey highlighted that DevOps managers are deploying multiple tools to support their DevOps efforts.

The current DevOps toolchain ecosystem is fragmented with a mix of both open source and packaged offerings. IT organizations should consider a template or one central management platform that will ensure consistency of deployed application environments, according to Kiran.

Kiran also mentioned that about 70% of companies are aspiring to deploy to hybrid clouds mostly because they made investments in on-premise data centers, and now as they move their apps to the cloud, that hybrid footprint is important to them. One of the things the survey brought attention to is on average, respondents only run 23% of their apps on a hybrid cloud platform, with 65% of respondents running less than 24 applications in hybrid environments and only 8% running more than 75 applications. Kiran said this can be attributed to the complexities of a hybrid IT environment.

Other major highlights from this survey include top barriers to DevOps success, such as: 14% of respondents saying company culture is a top barrier, 13% saying testing automation is a barrier, and 12% of respondents saying legacy systems is a major barrier. Also, other barriers include limited IT skills, difficulty managing multiple environments, and a lack of DevOps plans and tools.