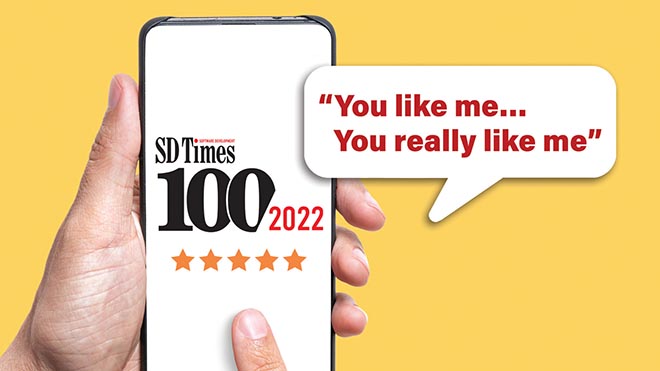 The great actor Sally Field, upon winning her Academy Award in 1984 for “Places in the Heart,” understood that the trophy meant that a rising Hollywood star had gotten the recognition for her on-screen work that she had longed for. It came not just from industry insiders, but from the general public at large.

Fast forward to 2022, and — while the Oscars haven’t lost their sheen — technology companies have their “You like me” moments through the five-star rating system under which users rank how much they like an application. And it’s also seen through the action of their peers and competitors, who are all striving to outperform each other on the grand stage of technology.

This year’s SD Times looks at the best of the software development companies from how they performed in 2021 — a year like no other due to the lingering COVID-19 pandemic, the fact of business shifting from central offices to remote locations, and the boon to our industry driven by the new types of tooling to enable this work-from-home culture change.

There are many familiar faces on this year’s list. Some have been industry stalwarts since the SD Times 100 began; others fell off the list in previous years and have managed to return by shifting to the new realities of software. And, for the first time, we are highlighting those companies that are new to the list, who — through hard work and innovation — have shown they belong among the best.

Continue to the first Best in Show: APIs and Integrations 2022

Looking for SD Times winners from previous years? Select from the list below: